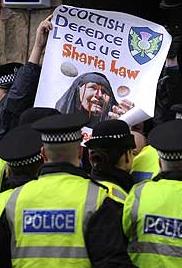 Berwick will be the location of another pair of demonstrations this summer as far-right groups announced intentions to march through the town.

Far-right groups the Scottish Defence League and the North East Infidels plan to travel to Berwick in order to hold a protest on July 5.

A statement was released expressing the council’s “revulsion and deep concern at the prospect of these fascist thugs once again invading our community with their messages of hate and division. In February last year Berwick put up a tremendous display of solidarity in opposing the SDL and EDL. The fascists on the other hand chanted racist slogans and caused mayhem in the town centre.”

The statement went on to call for a local response, which will be in the form of a counter demonstration inn the same vein as last year.

“We call on all those who supported the anti-fascist demonstration last year to do the same this year but this time to make it even bigger and stronger. Let’s tell these racist thugs they are not welcome in our peaceful and inclusive community. We have an organising meeting on Friday June 20 open to all those groups and individuals in our community who want to show a collective opposition to the fascists.”

The visiting groups are describing their march as a Ban the Burka event, and are planning to wear balaclavas as a sign of protest.

The Berwick United Against Fascism group describe the SDL as a “racist group with an established record of mounting protests which regularly feature racist chanting, placards and Nazi salutes.”

The NEI, meanwhile, are described as a “more openly racist and fascist than the EDL, splitting from it when its leader allowed Jews to join the EDL.” They are led by Warren Faulkner, who describes himself as “the Islamic terminator and leftist beateruperer.”

There were five SDL arrests during the afternoon, and widespread discontent with the massive cost of policing the demonstrations after traffic through town was stopped.

In a letter to the ‘Advertiser’, resident Michael Stewart complained: “Who is footing the bill for the massive police presence in the town to control this unruly mob? I have a feeling it will be the taxpayer, so that helps to explain why the police precept element of the council tax is rising this year!”

Quite why the SDL and NEI should pick on Berwick to demand a ban on the burka is unclear. According to the 2011 census there are only 207 Muslims in the entire Berwick-upon-Tweed parliamentary constituency (0.3% of a total population of 75,718) compared with 53,332 Christians. If Judaeo-Christian civilisation is threatened by a wave of Islamification, then Berwick would appear to be safe for the present. As for the burka, I think it would be reasonable to assume that the number of women who wear it in Berwick-upon-Tweed is approximately nil.