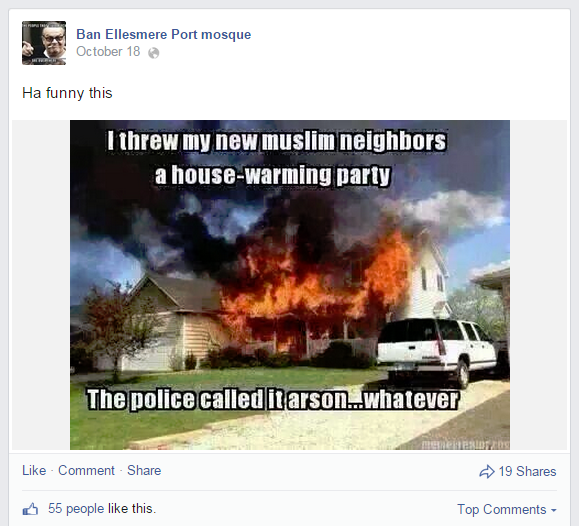 A man has been arrested after a pig’s head was placed outside an Islamic cultural centre in Ellesmere Port.

Police were called to King Street after a member of the public reported suspicious activity outside the Islamic Cultural Centre shortly before midnight on Wednesday (October 23). A pig’s head was found at the building, police have confirmed.

A 41-year-old man from Ellesmere Port was arrested in the early hours of this morning (Thursday) on suspicion of committing a racially aggravated public order offence. He remains in police custody and enquiries are ongoing.

Officers remain at the scene of the cultural centre, which is currently under construction after being granted planning permission by Cheshire West and Chester Council earlier this month amidst angry scenes.

Police have vowed to put an end to all racist incidents and hate crimes in Ellesmere Port following the latest attack on the centre, which will be used as a place of worship and to hold religious festivals.

Chief Inspector Giles Orton said: “Local residents can be reassured that the police have a high visibility presence in the area. Through firm policing we will put an end to racially aggravated incidents in Ellesmere Port. Hate crimes are not tolerated within this community.”

The vow comes as a Facebook group containing racist content, including images of pigs and anti-Islamic messages, reached almost 600 likes. The ‘community’ page, named ‘Ban Ellesmere Port Mosque’, was set up on September 12 by an unnamed individual, and says it aims to “stop Muslims taking over Ellesmere Port” and “keeping Britain British”.

When asked about the social media page today (Wednesday) police and community leaders would not comment due to ongoing enquiries, and would not confirm whether it was connected with the incident.

Last month a man was given a restraining order, forcing him to stay away from the former Ellesmere Port Unemployment and Culture Centre, after hanging racist bunting decorated with swastikas and KKK symbols outside the building.

Martin Peter Sallis strung up a plastic England flag and garden bunting scrawled with racist slogans and symbols, with messages threatening to “burn down the mosque” with Muslims in it. Unemployed Sallis, of Sutton Way in Great Sutton, said he carried out the crime because he wanted to “fit in” with the local community who he claimed were against proposals for an Islamic cultural centre in King Street, Ellesmere Port.

Chester magistrates imposed a restraining order forcing him to stay away from the proposed religious centre for 12 months, following the incident in June. He was also sentenced to a 12 month supervision order, with a drug rehabilitation requirement, a three month curfew, and ordered to pay £145 – £85 of which was court costs.

And earlier this month police warned members of the public to be careful about what they posted online, after a 36-year-old man was arrested on suspicion of distributing racist material about the town’s mosque. He was released without charge.

Anyone who may have seen anything suspicious is asked to contact Cheshire police on 101.

There is also an online anti-mosque petition, the author of which – one Tony Catchpole – is an admirer of former English Defence League leader Stephen Lennon (“Tommy Robinson”) and of the rabidly Islamophobic far-right group Britain First. (There is also a “YES to the Ellesmere Port Mosque” petition here.) 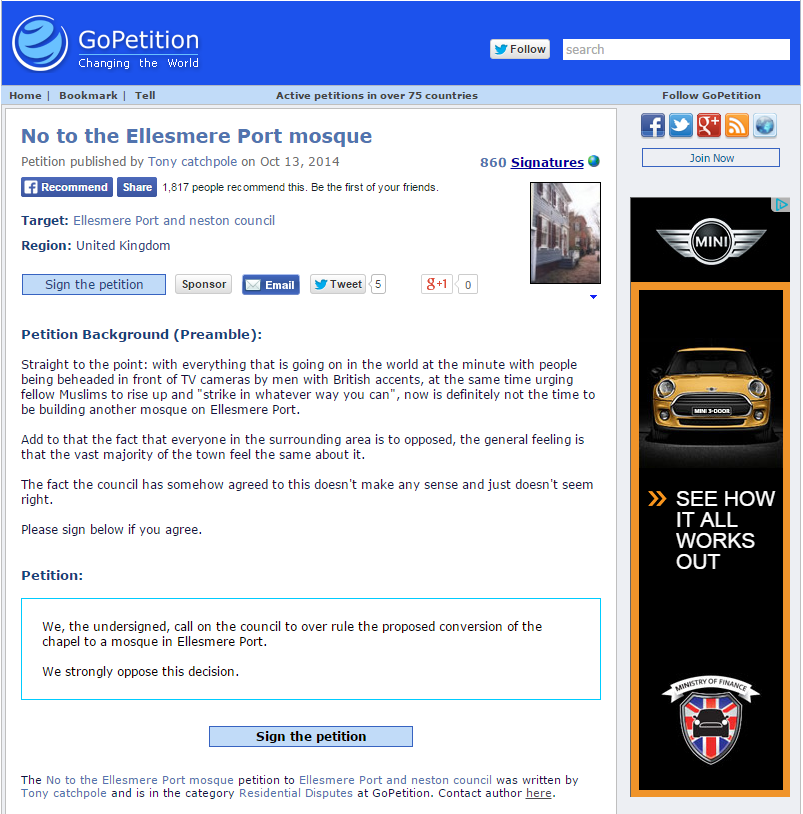