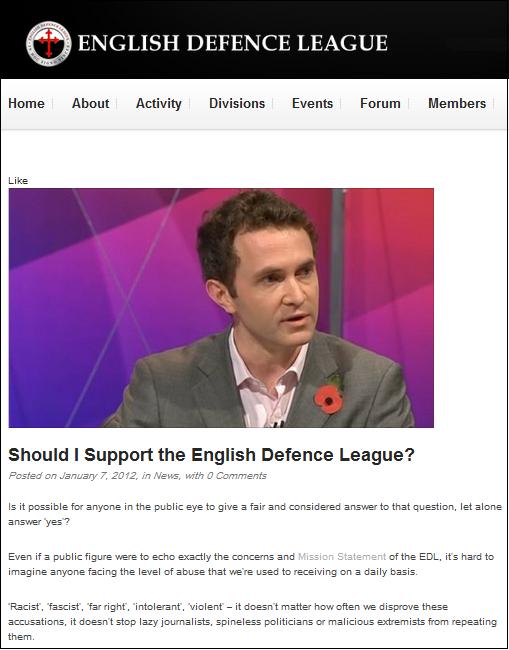 The English Defence League have posted an article on their website urging support for their fight against “Islamic extremism”. It begins with the usual whinge about how they are falsely accused of being far-right racists: “The eagerness of some in the media to paint a group of patriotic people as some kind of extremists (when they’d never make such an offensive and blatantly untrue generalisations about more ‘sensitive’ groups of people) illustrates the application of a double standard reflective of what we’ve regularly referred to as a growing two tier system.”

However, not all the news is bad: “Luckily there are a few members of the middle and establishment classes who believe that the EDL at least deserve a fair hearing. One of these is the British writer and former director of the Centre for Social Cohesion, Douglas Murray.” This is followed by a video of Murray speaking at the One Law For All seminar last year where he welcomed the EDL as “a grassroots response from non-Muslims to Islamism”. The EDL applauds the fact that Murray “identifies ‘decent ordinary people’ with the EDL. Whilst he’s cautious of the need to ensure that the EDL is not hijacked by undesirable elements (so are we!), he recognises that most EDL supporters simply care about their communities and their countries”.

The article concludes: “It’s a pity there aren’t more public figures like Douglas Murray: people who are willing to give us a chance, to give us the benefit of the doubt, and to treat us fairly. But perhaps, having been right about Islamic extremism, it’s much easier for him to avoid falling foul of the tendency common to all those who begin to realise that they’re losing the argument: shouting ‘racist’. Thank you for being right Mr Murray.”

Last year the Centre for Social Cohesion merged with the Henry Jackson Society and Murray is now an Associate Director of that organisation. You might think that this alone would result in the Henry Jackson Society being treated as political pariahs. Yet the HJS continues to serve as the secretariat to two All-Party Parliamentary Groups – on Homeland Security and Transatlantic & International Security – and recently gave evidence to the Home Affairs Committee’s inquiry into the roots of violent radicalisation.