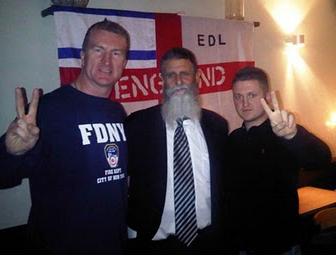 The rabbi who spoke at an English Defence League rally two months ago has apparently challenged Chief Rabbi Lord Sacks to a televised BBC debate on “Is Islam a religion of peace?”

Californian Nachum Shifren was the speaker at the far-right group’s October rally outside the Israeli Embassy. He called Muslims “dogs” and criticised British community leaders and rabbis for speaking out against him, saying: “To all my Jewish brothers who have called me a Nazi… I say to them they don’t have the guts to stand up here and take care of business.”

Now Rabbi Shifren, who lost a bid for a Californian state senate seat, claims he is planning a TV debate with the Chief Rabbi on “the Islamification of Britain, cultural Marxism in western liberalism, multiculturalism and its effect on the host society”.

In an email seen by the JC, Rabbi Shifren says he has set rules for the debate structure, to be followed by the Chief Rabbi and the BBC – despite no known interest in such a programme from either party.

He demands that the debate should not be moderated or edited, with no “extraneous commentary.” He adds: “The programme should not be advertised or announced using such inflammatory labelling as ‘far-right ‘extremist.’ i.e. not served up in terms that suit the Marxist-Islamist agenda of the BBC. This is strictly a bout between two combatants from which the listener and viewer may draw their own conclusions.” He also requests that no audience be present at the debate to avoid “Trotskyist structures.”

No-one from the Chief Rabbi’s office was available for comment.