Police arrested two men yesterday for allegedly publishing a catalogue of vile and racially inflammatory material on the internet.

One of the men, from Paignton, is thought to be responsible for a series of anti-Muslim videos. He was one of two men arrested by Devon and Cornwall police on suspicion of publishing racially inflammatory material at 8.30am yesterday. He and a 41-year-old unnamed male, also from Paignton, were yesterday bailed by Police until May. Material was confiscated from an address in South Devon and a banner was removed from the boot of a car.

A police spokesman said: “We have investigated a number of incidents across the internet after they were brought to our attention last year. We have yet to analyse what has been seized and will then be in a better to look at what, if any, offences have been committed.”

One Million United points out that the English Defence League have helpfully identified the two arrested men as members of the EDL. 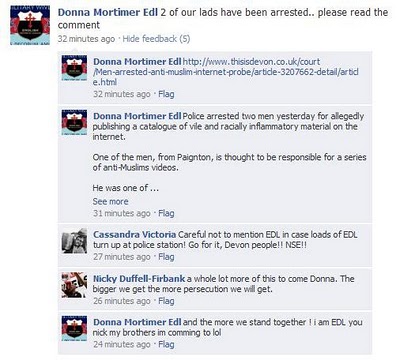