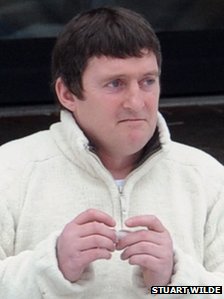 A former BNP member has been convicted of a religiously aggravated public order offence for putting anti-Islamic literature in his window.

Darren Conway, 44, claimed he displayed the posters because he wanted to force his letting agents to improve his flat. Lincoln magistrates convicted him and sent the case to Lincoln Crown Court for sentencing. Conway of Heaton Street, Gainsborough, Lincolnshire, admitted growing 16 cannabis plants found in the flat. He was arrested in April last year after a complaint from a nearby shop worker about the posters.

Edward Johnson, prosecuting, described the material on his windows as grossly offensive towards the Muslim faith. Conway admitted that at the time of the offence he was a member of the BNP and a supporter of the English Defence League but said he had since left the BNP. He downloaded most of the material from the internet, the court heard.

Conway told the court that he acted recklessly in an attempt to draw attention to his rented property, with the aim of getting the letting agents to carry out improvements.