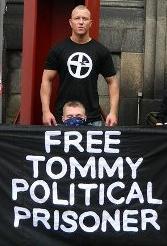 The Daily Telegraph reports that the English Defence League has sacked Kasper Mortensen (pictured), spokesman for the Danish Defence League, after he was jailed for assaulting a bouncer with a large metal torch and a taser gun.

“For someone in a responsible position such as heading up a Defence League to get himself involved in a brawl is not the best thing to have happened,” Steve Simmons, who is in charge of the EDL’s European organisation, told the Telegraph. “When he comes out, certainly he will no longer be the spokesman for the Danish Defence League.”

The sacking takes place only a few weeks before the EDL’s Danish wing will host a European “counter-jihad” rally in Aarhus. Philip Traulsen, a 34-year-old veteran of Denmark’s far right, is organising the demo in Mortensen’s absence.

Steve Simmons is quoted as saying that he tries to vet EDL supporters who set up sister organisations in other countries: “We check them out as best as we can. We look around and make sure that they’re not linked to any neo-Nazi organisations, and if they’re found to have any such links we turn them down.”

In Philip Traulsen’s case you can only conclude that Simmons didn’t look very hard. A quick google revealed the information that he is a key member of the far-right Danmarks Nationale Front, along with a photograph of Traulsen at a Nazi Blood and Honour concert in 2008.