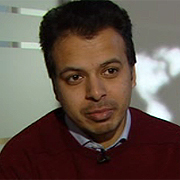 Ed Husain draws the lessons of the airline bomb plot:

“Although one fanatical Muslim cell has been caught, this is no time for complacency. Make no mistake, terrorism is flourishing in our country as never before.

“Why? Because a toxic combination of politically correct policy, denial and fear have opened the way for hate to grow in our midst. Unwilling or unable to recognise the scale and cause of the danger we are all facing, our leaders have turned a blind eye to what is going on.

“There are now tens of thousands of Muslims living in Britain, physically present in our country, but psychologically attached to Muslim-dominated countries. Large parts of our cities have become Muslim ghettos, where you can wake up in the morning and go to bed at night without seeing a non-Muslim face. They might as well be in Pakistan or Afghanistan for all the contact they have with ordinary Britain. They can send their children to Muslim state schools, go to Muslim NHS doctors, and do business at the Islamic bank.

“Not only this, but we, the taxpayers, fund many of these Muslim ghettos. When immigrants arrive in this country to claim free housing from the Government, they are given a choice of Muslim areas to settle in….

“Because of their stronger national identity, the Americans encourage immigrants to join their culture and newcomers are expected to be loyal to the U.S. For us, it is not too late. We can reverse the damaging policies that have made Britain a seedbed for terrorists. But if we fail to do so, I fear we will see further carnage unleashed on our streets.”

Postscript:  Just to add, there is of course no evidence whatsoever to link areas that have a high proportion of Muslim inhabitants with terrorism. In their book ‘Sleepwalking to Segregation?’ Challenging Myths About Race and Migration (pp.109-10), Nissa Finney and Ludi Simpson analyse the data for the districts of origin of Muslims charged with terrorist offences. They write:

“If ‘segregated areas’, where there are the largest concentrations of Muslims, were hotbeds of terrorism … then one would expect more to be charged in these areas. Seventeen of those charged in the period August 2004 to October 2006 were residents of Bradford, Luton, Newham or Wandsworth, four of the seven most Muslim districts where 18% of the population is Muslim. But just as many lived in other areas; for example, 16 lived in districts with on average only 1% Muslims, coming from Breckland in Norfolk, Doncaster, Bournemouth, Reigate in Surrey, Bexley, Brighton and Hove, Aylesbury Vale and Greenwich. The only set of districts where more Muslims were charged than others was those with the second-lowest concentrations, including Crawley, Lambeth, Wycombe and Manchester. So, Muslims living in highest concentration Muslim areas are not more likely to be terrorists than Muslims living in any other type of area. There is no reason to link particular levels of concentration with terrorism.”

An earlier summary of Finney and Simpson’s research can be read here.

Trying to be charitable, you might explain Ed Husain’s baseless accusations about so-called “Muslim ghettos” as the result of sheer ignorance based on incompetent research. After all, Quilliam is the self-styled “think-tank” that recently produced a paper on the British National Party which claimed that the BNP vote in the 2009 elections to the European Parliament was “actually down on 2004“, when in reality the fascists got 943,598 votes this year compared with 808,200 five years ago.

But there is more to it than that. Ed Husain has clearly made a conscious decision to bolster the anti-Muslim myths promoted by the hardline right-wing press. It is no wonder that Husain is so keen to deny the existence of Islamophobia, because he himself has made a significant contribution to encouraging and legitimising it.