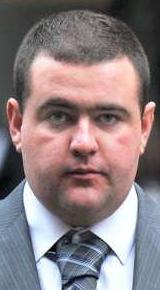 A drunken yob who threatened to burn down a mosque has escaped jail “by a whisker”.

John Walsh, 25, shouted abuse at a member of the mosque on Liverpool Road in Eccles before kicking at the door. Walsh – a plant vehicle operator from Boardman Street, Eccles – then turned on a nearby shop manager. He was given a community penalty and warned he would face prison if he committed a similar offence in the next two years.

The court heard how a member of the mosque had been locking up after prayers when he heard Walsh shouting from across the street. Patrick Buckley, prosecuting, said Walsh had shouted words to the effect that he was going to “burn down” the mosque.

Walsh then kicked and pushed at the locked door before going into a nearby shop and racially abusing the manager. He returned to the shop later and began shouting football songs, but a police officer was inside and he was arrested.

Judge Bernard Lever, sentencing, gave Walsh a two-year community order with six months’ supervision. He ordered him to carry out 150 hours of unpaid work and placed him under a curfew.