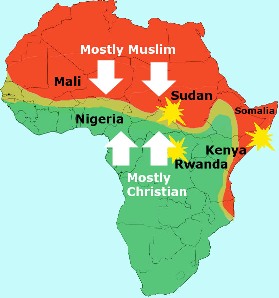 Richard Dawkins is often described as a “militant atheist”. However, if this term is meant to convey that Dawkins maintains a uniform hostility to all varieties of religious belief then it is misapplied.

Dawkins makes no attempt to hide the fact that he is discriminatory in his opposition to different faiths. He happily describes himself as a “cultural Christian” – by which he means a cultural Anglican. After all, according to Dawkins, Roman Catholicism is “the world’s second most evil religion”. No prizes for guessing which faith is the most evil. Indeed, Dawkins holds the view that Islam is not only by far the worst of all the major faiths but is also arguably “the greatest man-made force for evil in the world today”.

In the past, however, Dawkins has presented evangelical Christianity in the US as a major enemy alongside Islam. Addressing a session at the Edinburgh International Book Festival in 2008, he told his audience that it was “possible to see Europe as a haven of civilisation, with the pincer movement of Islam on one side and the US on the other”.

Now, however, Dawkins is prepared to consider the possibility of an alliance with US Christian evangelism to stem the tide of Islam. He has reproduced on his website a map by the Bakke Graduate University which portrays Islam and Christianity locked in conflict over the future of Africa. The BGU warns:

“For centuries, Islam has attempted to move southward on the continent of Africa. In spite of wars, political upheavals, and massive financial investments, the spread of Islam has remained stalled for 400 years just south of the Sahara desert and just inland of the eastern coast. The Islamic and Christian worldviews remain deadlocked in front-line nations such as Somalia, Sudan, and Mali.

“North of this line, wealthy foundations from the Middle East have poured money into colossal mosques, Islamic schools, and economic development. The strategies to reinforce this front line appear to be well-coordinated efforts to use money, impressive buildings, and children’s education to shore up the future of Islam in the region.”

Still, all is not lost. The BGU explains: “It appears as if God is reinforcing the African front-line from the south with resources from the west. This is not a centrally-planned strategy, but the movement of the Holy Spirit in churches, businesses and governments. Many who supply relief and education probably aren’t aware that they have been sent by their Creator to accomplish His purposes in the region. Others are acutely aware of His call.”

And how does Dawkins respond to Bakke Graduate University’s promotion of Christian-Muslim conflict in Africa? By using it to illustrate his thesis that religious faith is “dangerous because it teaches enmity to others labelled only by a difference of inherited tradition”? Not at all. He writes: