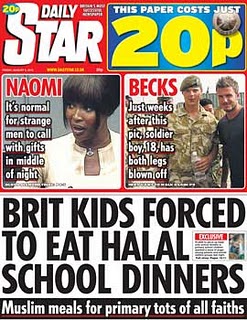 Furious parents last night hit out at plans to serve halal-only school dinners. Pupils will have no option but to eat meat slaughtered following Islamic teachings specifically for Muslims.

The controversial technique involves unstunned animals bleeding to death after having their throats cut. Campaigners say the method is barbaric and should be banned.

But all high schools in the London borough of Harrow have been told to provide only halal meat on menus. Already two of the borough’s 52 primary schools have chosen halal-only menus. There are fears the other 50 will follow this autumn.

The ruling has sparked huge protests among parents who say they were not consulted. Angry opponents say it is blatantly pandering to Muslims by trampling over the feelings of other faiths.

Update:  See also Nick Ferrari’s piece in the Sunday Express: “Have I suddenly woken up in Saudi Arabia? While I wasn’t looking, did we simply stop being a Christian country? There can be no other explanation for the daft and downright divisive decision made to use only halal meat in all school meals in one part of London from next month.”