The virulent Boycott Halal movement in Australia is set to escalate with a petition to federal parliament in the New Year demanding the Corporations Act 2001 be changed to mean only Muslims bear the cost of halal certification on everyday products.

Halal products are those deemed permissible for Muslims to eat or use under religious law. Many mainstream products in Australian stores are halal certified including food from SPC, Nestle, Kelloggs and Kraft. Supermarket chains pay for certification for some products, as do dairy factories and meat processors.

Worldwide the halal industry is worth $US 2 trillion and is growing 20% a year. Companies are keen to capitalise on the boom, so halal certification is increasingly common. All products exported to Muslim countries are certified before they go.

Australia has 21 Islamic groups approved by the federal government to issue halal certificates. Of the 21 only four, with one in Melbourne and three in Sydney, get most of the work, including Indonesian contracts.

The new Indonesian government has begun to dismantle an Islamic agency which is facing corruption allegations and which approves halal imports from Australia. Halal exports are worth $12 billion with growing competition from China and Brazil.

The Boycott Halal campaign is led by New South Wales farmer Kirralie Smith and supported by extremist groups including the “Islam-critical’ Q-Society, Restore Australia, the Australian Defence League and the Patriots’ Defence League.

Q Society president Debbie Robinson said the petition and campaign also want clearer labelling on halal products “to ensure consumers can make a conscious decision.” Ms Smith said: “Our primary focus is lack of choices. I felt deceived as a consumer that products pay halal certification fees and there was no way as a consumer that I knew.” 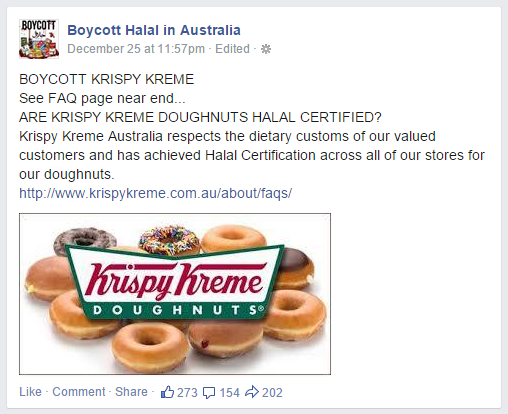