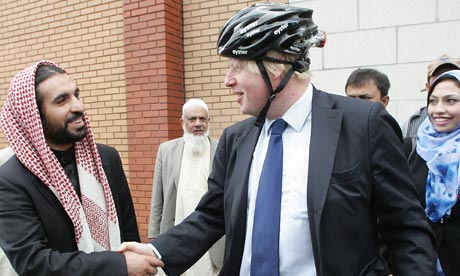 Boris, friend of the Muslim community – Johnson on his visit to the East London Mosque in 2009

Possibly taking his inspiration from yesterday’s Daily Star Sunday front page, London mayor Boris Johnson proposes in his Telegraph column today that Muslim children considered to be under threat of “radicalisation” by their parents should be taken into care.

We are familiar by now with the threat posed by the preachers of hate, the extremist clerics who can sow the seeds of madness in the minds of impressionable young people. We are watching like hawks to see who comes back from Syria, and the ideas they may have picked up.

We know that the problem of radicalisation is not getting conspicuously worse – but nor is it going away. There are a few thousand people in London – the “low thousands”, they say – who are of interest to the security services; and a huge amount of work goes into monitoring those people, and into making sure that their ranks are not swelled by new victims of radicalisation.

What has been less widely understood is that some young people are now being radicalised at home, by their parents or by their step-parents. It is estimated that there could be hundreds of children – especially those who come within the orbit of the banned extremist group Al-Muhajiroun – who are being taught crazy stuff: the kind of mad yearning for murder and death that we heard from Lee Rigby’s killers.

At present, there is a reluctance by the social services to intervene, even when they and the police have clear evidence of what is going on, because it is not clear that the “safeguarding law” would support such action. A child may be taken into care if he or she is being exposed to pornography, or is being abused – but not if the child is being habituated to this utterly bleak and nihilistic view of the world that could lead them to become murderers. I have been told of at least one case where the younger siblings of a convicted terrorist are well on the road to radicalisation – and it is simply not clear that the law would support intervention.

This is absurd. The law should obviously treat radicalisation as a form of child abuse. It is the strong view of many of those involved in counter-terrorism that there should be a clearer legal position, so that those children who are being turned into potential killers or suicide bombers can be removed into care – for their own safety and for the safety of the public.

That must surely be right. We need to be less phobic of intrusion into the ways of minority groups and less nervous of passing judgment on other cultures.

Sceptics might wonder what all this has to do with the murder of Lee Rigby, given that his killers were both Muslim converts who were brought up in Christian families.

There is also the question of what Johnson means by “radicalisation”. In a Telegraph column last year he argued that, while Islam as a faith was entirely legitimate, “we need to make a hard and sharp distinction between that religion – and the virus of ‘Islamism’. This is a sinister political agenda that promotes a sense of grievance and victimhood among a minority of Muslims. The Islamists want universal sharia law, and other mumbo jumbo.”

So when Johnson now asserts that “we must be firm to the point of ruthlessness in opposing behaviour that undermines our values”, it seems clear that he isn’t just talking about targeting terrorists or terrorist sympathisers. According to Johnson’s formulations, any parents who favour a society based on sharia or even promote “a sense of grievance and victimhood” in the Muslim community could face the prospect of having their children taken away from them.

Johnson’s proposal has met with the enthusiastic approval of both the Daily Mail (“Children of Islamist radicals should be in care, suggests Boris: Mayor of London warns hundreds at risk of being turned into fanatics by extreme parents”) and the English Defence League. While some EDL supporters tended towards the view that the problem would be more effectively solved by expelling the entire Muslim community from the UK, or killing them all, there was considerable agreement with Johnson’s plan.

Although Johnson doesn’t see fit to mention it in his Telegraph column, which is of course tailored to the prejudices of his right-wing audience, the obvious corollary of his argument is that the children of EDL members should be taken into care too. Challenged on his LBC phone-in this morning over whether the same policy should apply to the families of white far-right extremists, Johnson replied: “If that child is being taught to want to commit crime, or be full of hate, then I imagine you might contemplate such a thing.”

In reality, as Johnson knows quite well, there isn’t the slightest prospect of such a policy being applied to the far right – it’s only Muslim families who could conceivably be treated in this way. In other words, what Johnson is proposing involves precisely the double standards that drive the Muslim community to distraction and provide the conditions for the development on its fringes of the very extremism that Johnson claims to want to combat.

If Johnson had written an article proposing to take the children of far-right racists into care because they might be influenced by their parents’ support for violent extremism, you can imagine how different the response of the right-wing press would be.

In fact, you don’t have to imagine it. A couple of years ago the Sunday Express published a report by Ted Jeory suggesting, quite inaccurately, that social services in County Durham had removed a baby from an EDL member because they “fear the child would become radicalised with EDL views”. The article was entitled “Why try to take baby from EDL mother but not from ‘terrorists’?” We look forward to the Express publishing a follow-up piece by Jeory entitled “Why try to take children from Muslim radicals but not from the EDL?”

As for Johnson, it is doubtful whether he takes his own proposal seriously. Like his demand for restrictions on the right to strike, this looks like red meat for the Tory faithful rather than a thought-out policy. It isn’t difficult to identify Johnson’s political motivation.

Having for years written the most appalling right-wing crap for the Tory press, Johnson changed tack following his election as mayor in 2008 and for a while presented a more liberal face, presumably reasoning that this would help to consolidate his hold on power in a diverse city like London. He suddenly discovered the merits of multiculturalism, mended fences with the Muslim community and paid an official visit to the East London Mosque.

Now, however, he’s positioning himself to make a challenge for the Tory party leadership, so the liberal mask has been thrown off and he has reverted to type.