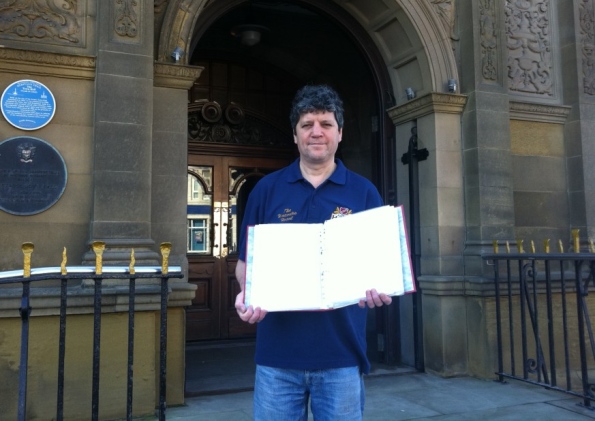 A petition with 3,000 signatures has been handed over to council bosses as residents stepped up their protest against an “illegal” mosque.

Business owners on Waterloo Road, South Shore, believe the Noor A Madina Mosque is operating illegally as it was opened before planning permission was granted. Owners of the site, which was formerly a takeaway, have since applied for retrospective planning permission to change the use of the site. But local people think the mosque will cause huge problems with parking around the area.

Mike Rowe, landlord of the Waterloo pub, handed the petition in to Blackpool Town Hall yesterday. He said: “Local people feel very strongly about the mosque. We believe it is operating illegally and would like to see it closed down. There are also huge concerns about parking, it’s very busy already and we think the extra traffic will affect health and safety. Waterloo Road is a commercial area so it should be commercial properties which are being developed there.”

A public meeting has been organised to discuss the issue on Tuesday. It will be held at 7.30pm at the Waterloo pub. Natasha Shah, co-owner of the mosque, has been invited to attend.

Mrs Shah said: “I don’t think this petition reflects the views of the whole community, but everybody has a right to their opinion. Our door is always open, come and see us before you make a decision about the plans. The mosque is for everyone to use in the community.”

You can read comments by opponents of the mosque here. Strangely enough, the issue of parking doesn’t feature very prominently in their diatribes. Some examples:

“i’ve wrote straight to the ward councillor! This is not just a mosque this is a Super mosque welcoming thousands of muslims to blackpool! They have already got a radio and tv station set up from the waterloo rd premises! will the muslims who wont worship in the town centre or waterloo rd mosque build more mosques! probably and it could be in your area next, that is why blackpool residents must get behind this petition and the blackpool council should say No!!!!”

“This is rubbish, they already have mosques everywhere. i travel from blackpool to preston for work then ride my bike from the train station to the other side of preston and theres areas that i go though that are purely asian, and they REALLY dont like it when white men go through there area. Blackpool WILL eventually end up like this, and with it being a family destination, how do you think the white tourists are gonna be made to feel. Let these people continue taking over and you may aswell say bye to the uk’s biggest tourist desination.”

“The local councillors need to realise that if they value their jobs they need to vote against this. Otherwise all the councillors will be muslim at the next election. That’s how it works, unfortunately. As a matter of interest, the teachings of the koran have been ruled to be incompatible with the European Convention on Human Rights.”

“The people who agree with this mosque have never lived amongst muslims. I moved from one area in Blackburn which was predominantly asian, buying a house in another area where there was only one asian family. Within 5 years it was predominantly asian and there was nothing but trouble with the arogant asian youths ganging up on our kids. Asian drug dealers and boy racers with the noisy BMWs blasting out their bass speakers and noisy exhausts. Asians moved in next door to us and the smell of their cooking drove us out of our house as the stink came through the floorboards into our house, and we had to stay out for hours at a time until the smell went. We eventualy had enough and some of the reasons we moved to Blackpool was a mixture of all that and the fact that our youngest was the only one in his class that wasn’t muslim. Thats the way it is in Blackburn now. The asians in Blackpool at the moment are not so arrogant for now, but they certainly would be if they are given the chance to multiply. The more there are of them the worse they get.”

True, a couple of commenters try to reason with the bigots. One of them argues: “Most of the ‘concerns’ expressed on here are both archaic and antiquated and consigned to the past. Britain has evolved, so get with the program people! This isn’t, ‘Love Thy Neighbour’, Eddie Booth died a long time ago. This is 21st Century Britain, and it’s changed – live with it!”

Only to receive the following reply:

“Charles obviously has a pathological issue with race and cant see that some cultures are oppressive, intolerant, homophobic, mysoginistic like islam for example, which is a political totalitarian ideology (like fascism) dressed up as a religion. All muslim countries are much less free thatn their western counterparts, now theres a clue. Yes we are 21st century Britain, we have multi-cultralism and guess what charles, its FAILED BIG TIME. People are defending their way of life, their freedoms and using their right as British citizens to say NO to oppresive ideologies that threaten the ideals of western culture. They are not racists but wanting to stop a sepratist hate filled ideology, founded a ‘prophet’ who spread Islam at the point of a sword, heres another clue Charles: Islam means submission, penny dropping yet?”

“This is hilarious. Reading those comments is like watching an episode of Jeremy Kyle. I’m shocked and appalled that there are so many ignorant and racist people in Blackpool. Some old bint with no teeth and greasy hair asked me to sign a petition against ‘these muslamics’. I had to stop myself from laughing in her face, especially when she started talking about ‘shakira law’. Surely people realise that there are good and bad within every group of people? Are people really stupid enough to judge others on their colour, race or religion? Do we now hate all white people after Anders Behring Breivik shot all those children in Norway? Do we hate all Irish people after the IRA bombings? Do we hate all ginger people after Chris Evans left Billie Piper? No Blackpool, no we do not. Grow up.”

Update:  The Blackpool Gazette report has been posted on the English Defence League’s Facebook page. Here are some of the comments from EDL supporters: 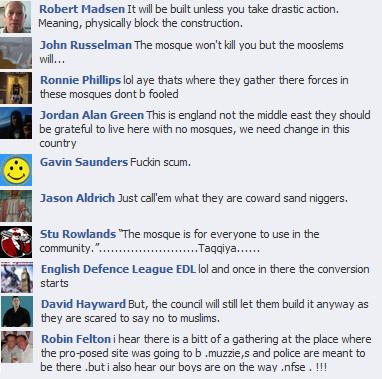