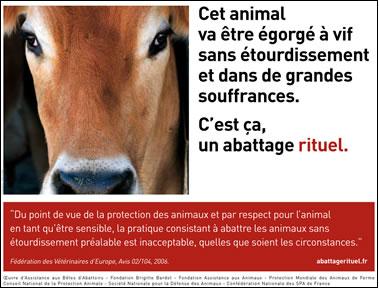 “I can no longer accept that in order to please a god animals have their throats slit like in the Middle Ages without being stunned beforehand, when we have modern methods to prevent animals suffering,” the 76-year-old Bardot told AFP.

The Brigitte Bardot Foundation and six other rights groups are planning to put up more than 2,000 posters across France sporting a picture of a cow’s head and a text denouncing ritual slaughter.

France is home to Europe’s biggest Muslim minority, estimated at between five and six million, and to the continent’s biggest Jewish community, believed to number up to 700,000.