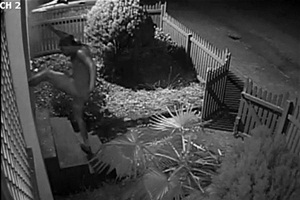 Newcastle police say a two-month long investigation combined with information from the community has led to a 25-year-old man being charged over an attack on a local mosque.

Early last month several men tried to kick in the door of the Wallsend mosque after childrens’ scripture classes. A Maryland man will face court in April after being charged with intimidation, causing malicious damage and entering enclosed lands.

Newcastle Crime Manager, Detective Chief Inspector Wayne Humphrey says the investigation is ongoing. “It’s just another example of the public doing the right thing and giving the information to police. The actions of the person are now subject to Court so I can’t comment on those but a lot of crimes are solved by the information from the public being accurate and timely, and in this case it’s been very successful.”

Detective Chief Inspector Humphrey says the incident was caught on CCTV and police used the footage as well information from the public to make an arrest.

“There’ve been enquiries ongoing and as a result of some good information from the public at least one of the persons has been identified and spoken to by police and he’s been issued future court attendance notices,” he said. “We anticipate that another gentleman who could assist us with our inquiries will be spoken to in the coming weeks when he returns from interstate.”