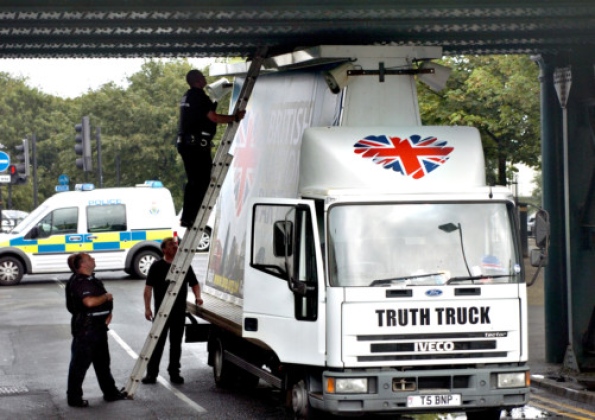 Protestors were left stuck when their truck became wedged under a bridge.

The British National Party (BNP) returned to Pallion at the weekend to continue their demonstration against the use of halal meat at St Luke’s Subway store.

But as their “truth truck” made its way under a bridge in the Sheepfolds area of the city, it became stuck. Police had to cordon off the street while it was unwedged by releasing air out of all four tyres so it could be moved.

The incident, near to St Peter’s Metro station, happened at about 2.20pm on Saturday and the vehicle was lodged for several hours until it could be towed away.

Before the incident, a war of words were exchanged outside the Pallion food store with BNP protesters lining one side of the street and counter demonstrators gathering on the other side.