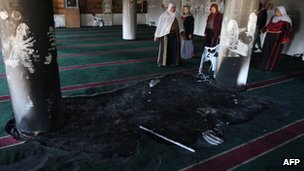 Vandals set fire to another mosque in the West Bank on Thursday and defaced it with Hebrew graffiti.

The governor of Ramallah, Laila Ghanam, said arsonists doused the mosque in the village of Burqa with gasoline, then set it afire. The Hebrew words for “war” and “Mitzpe Yitzhar” were painted in red on a wall, and the Israeli military said carpets and chairs were burned.

In recent years, settlers have attacked Palestinian and Israeli military targets in retaliation for Israeli government operations they see as overly sympathetic to Palestinians. The increasing frequency of the attacks, the sparse number of arrests and paucity of indictments have generated allegations that the Israeli government isn’t acting forcefully enough against extremists after two years of violence.

On Wednesday, following an assault on an Israeli military base, Prime Minister Benjamin Netanyahu approved measures to clamp down on extremists, including giving soldiers the authority to make arrests and to ban extremists from contentious areas.