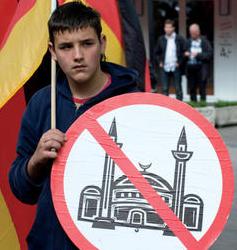 The survey, by the Allensbach Institute for the Financial Times Deutschland, showed that 55 percent of Germans thought Muslims “cost considerably more socially and financially than they produce economically.” Only one fifth of those polled believed the opposite. Anti-Muslim feeling was strongest in economically depressed East Germany, where 74 percent had a negative view.

The poll followed weeks of debate prompted by a member of Germany’s central bank, Thilo Sarrazin, who sparked outrage when he said the country was being made “more stupid” by poorly educated and unproductive Muslim immigrants. Most Germans, however, believe he is correct, the poll suggested, with 60 percent saying they agreed with his thesis and 13 percent disagreeing.

Sarrazin eventually resigned from the bank, but the controversy raised fears that a charismatic populist, like anti-Islam Dutch lawmaker Geert Wilders – who is due in Germany this weekend – could win considerable support.

There are between 3.8 and 4.3 million Muslims in Germany, or between 4.6 and 5.2 percent of the population, according to government figures.