Our friends at Quilliam have proudly announced that they will be holding a roundtable event next week at which ex-members of the English Defence League will condemn their former organisation.

This would appear to be in line with the view promoted at the Summit Against Violent Extremism in Dublin last month, with which Quilliam was actively involved, namely that individuals who have renounced extremist violence are among the best placed people to campaign against it.

As Quilliam’s publicity for the 20 July roundtable explains, while the EDL has gained prominence through its often violent public activities, “relatively little is known about the group’s internal workings, its methods of recruitment, its overall strategy and its future plans. For the first time ever, Quilliam is able to bring together former senior members of the EDL who have renounced the group and are willing to speak out against it publicly and to answer questions about the organisation and their time inside it.”

The two individuals concerned are Leighton Evans and Harry Burns, both of whom are part of the so-called Anti-Extremism Alliance that co-ordinated the protest against Hizb ut-Tahrir’s conference in East London last weekend.

Leighton Evans is also an admin of a Facebook page called EDL, MDL, UAF or anyone else with an opinion? In a post on Wednesday he defended himself against criticism from his former comrades in the EDL, insisting that he still held a favourable view of the organisation: “Well Ive upset a few people by talking to the media. do you know what? I gave the EDL their biggest rave review and to the gaurdian as well. if people dont get that then fuck em!”

But it seems that the interview with the Guardian won’t make it into print. As Evans explained in a follow-up comment yesterday: “it was supposed to tie in with the quilliam thing but theyve stitched me right up in their press release making out i was going their to renounce the edl and spill the beans on the leadership. i might not march with them anymore but still agree with the original idea”.

It would appear that Evans’ break with extremism is rather limited to say the least. This did not, however, prevent Charlie Flowers, his colleague from the Anti-Extremism Alliance, commenting that it was “a damned shame” (that the Guardian won’t be publishing the pro-EDL interview, presumably, rather than that Evans still agrees with the original aims of the EDL).

Evans had further harsh words to say about Maajid Nawaz and Co today: “The quilliam fuckers had us right over. When I get onto the computer i’ll show you the email I got with 4 questions on it and a short bio of me. I replied putting him right about me but the cunt still printed a load of bollocks.”

And in a comment at Expose, Evans has given some additional details: “i refused to go along with what the quilliam wanted me to do which was renounce the edl. i wont do that and it was never on the agenda in my email exchanges with ghaffar hussain. he said i’d be asked why i joined, what i did, why i left and what i think know. he then released that load of old bollocks which i was never party to.”

So I think we can take it that Leighton Evans won’t be appearing on 20 July. Quilliam better hope they can hang on to Harry Burns, otherwise it won’t be much of a meeting will it?

Update:  And on the matter of Harry Burns, it’s worth checking out the contributions to a discussion at Expose from a character called Arry Bo, which Richard Bartholomew tells us is one of Burns’ pseudonyms. Arry Bo signs off with the following comment:

You’d have thought some of Quilliam’s supporters might question the wisdom of providing a platform for an individual who holds such views.

Update 2: Arry Bo has returned to Expose to expand on his differences with the EDL and his views on Muslims and Jews: 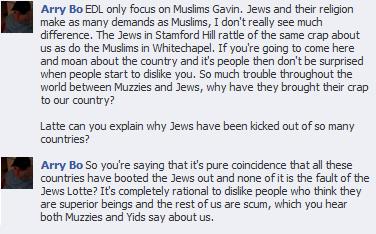 Mind you, it’s doubtful whether Charlie Flowers would find anything objectionable about this.

Update 4:  Yup, the 20 July roundtable has now been cancelled. Details of the meeting have disappeared from the Quilliam website without explanation.