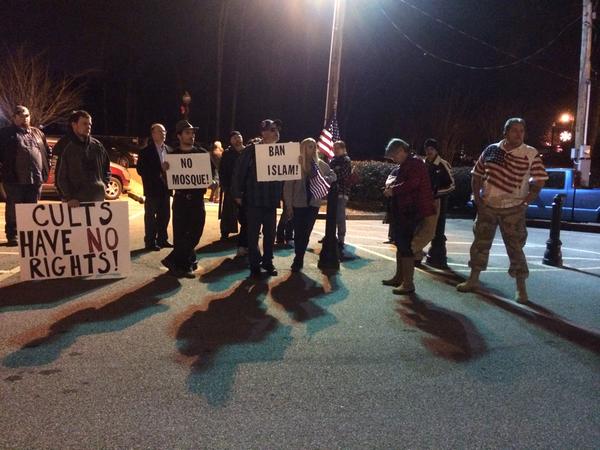 When Mayor Mark Mathews adjourned the meeting, all the council members left the room quickly through a back door. Mathews remained but said none of the other council members would comment on the change of vote.

Mathews said Monday’s vote will allow the mosque to operate in the retail center without stipulations for 24 months. “It was a fairly unusual experience for us, but I think we’ve taken action,” Mathews said.

The permit for the prayer center was denied with a 4-1 vote by the City Council at its Dec. 1 meeting.

Councilwoman Cris Eaton-Welsh, the sole vote in favor of the permit at that meeting, said Monday she was “glad we can move forward and focus on all the great things happening in Kennesaw.”

Councilwoman Debra Williams said in a statement to the MDJ after the meeting that all she could say about changing her vote on the issue was “RLUIPA trumps.”

Williams is referencing the Religious Land Use and Institutionalized Persons Act, a federal law protecting religious institutions from discriminatory zoning laws the applicant threatened to use as a basis to sue the city if the permit was denied.

Protesters outside City Hall were peaceful but vocal about their opinions of the mosque.

“They get a bunch of people in an area, and then they institute Sharia law, and then they beat their wives, et cetera, et cetera. I don’t want to go into all the other terrible things they do,” Untz said. “This is going to start happening all over the state.”

The temporary land use permit approved by the council Monday night gives the applicant 24 months to use the space before Mufti Islam will have to reapply, but Untz said she thinks the mosque will never relocate.

“Everyone knows there’s no such thing as a temporary mosque. Once they establish a mosque, they keep it. They own it for Allah,” Untz said.

Chris Hill, a protestor from McDonough, said he also thinks the mosque will lead to Sharia law in Kennesaw. “Sharia law cannot be allowed to masquerade as a religion,” Hill said.

Gloria Williamson, a protester from Jasper, called Islam a cult and said it should not be given the freedom religions such as Christianity enjoy. “It’s a cult. It’s not a religion because they teach hate toward Americans,” Williamson said.

After the vote, supporters of the mosque were confronted by protesters outside, and one Kennesaw resident, Holly Lacour, apologized for the protesters’ actions. Lacour, who said she lives just down the street from where the new mosque will be located, told the applicants she was sorry some Kennesaw residents had reacted negatively toward them.

“It broke my heart to see them treated this way,” Lacour said. “I identify as an atheist, but I support all rights to religious freedom. My neighborhood is very diverse, and that’s how I want my city to be.”

Dallas resident Danielle Longamore supports the mosque and said she thinks the protesters represent a minority. “I don’t think that group of people really represents Kennesaw as a whole because of their unwillingness to talk and their stubbornness,” Longamore said.

Before the vote, Khalid El-Amin, a supporter of the mosque, said he wasn’t bothered by the protesters. He said he was there for the vote, not the protesters’ show. “They have the same right to protest as we do. And, as long as the right people say ‘yes,’” El-Amin said, nodding toward the council inside City Hall, “all of this doesn’t matter.”

Kamaral Hosein, a supporter of the mosque and a Muslim, said he was proud of the council’s decision to change the vote. “This is a victory not only for the mosque and Muslims, but for the whole community as a whole,” Hosein said.

The City Council first voted to deny the mosque inside a retail center with a 4-1 vote Dec. 1, with council members Leonard Church, Tim Killingsworth, Jim Sebastian and Williams voting down the application.

Doug Dillard, the applicant’s attorney, threatened the city with a lawsuit after the council’s decision to deny the application. Dillard said he could file a $1 million claim invoking Religious Land Use Act in Cobb Superior Court, according to a letter included in the application presented to the council at its Dec. 1 meeting.

After this warning, Mathews said all four council members who voted to deny the mosque individually asked the mayor in private to change their previous vote at the council’s Dec. 10 meeting.

Monday night, the council voted 5-0 to approve the four council members’ requests to change their votes. Now, the city’s record will show that the application for the mosque was approved 5-0.