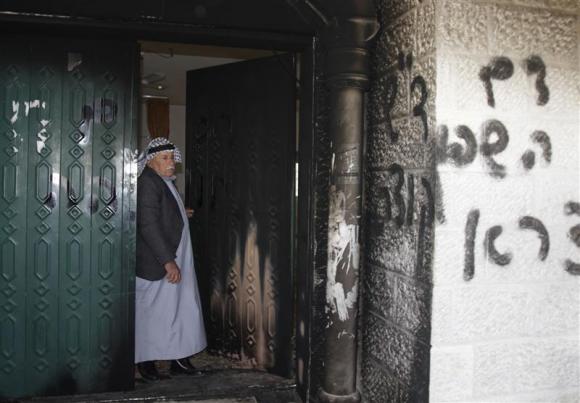 A mosque in the Israeli-occupied West Bank was partly set on fire on Wednesday in what Palestinian residents said was an attack by Jewish settlers living nearby.

The main gate of the mosque in Deir Istiya village and some of the carpeting inside were charred by the flames. Graffiti in Hebrew, reading “Revenge for spilled blood” and “Arabs Out”, was scrawled on an outside wall and a door.

Such slogans have been used in previous attacks on Palestinian property which police suspect were carried out by settlers.

The incident comes at a delicate time in Israeli-Palestinian peace talks, which were revived last year and are set to expire in April. The United States is trying, with little obvious success, to narrow gaps between the two sides.

Israeli soldiers entered Deir Istiya after the attack and an Israeli police spokesman said a search for the suspects was under way.

A series of vandalism acts involving arson and writing graffiti on homes – apparently perpetrated by settlers – in Palestinian villages in recent weeks has raised tensions.

Last year, the Israeli Defence Ministry announced a crackdown on settler vandals, saying they were tantamount to terrorists and their attacks could fan sectarian violence.

Israel cites Biblical and historical claims to the West Bank, but the United Nations considers its settlements illegal and most world powers say they are an obstacle to peace.

Palestinians want the occupied West Bank and East Jerusalem, both captured by Israel in the 1967 Six Day War, as part of their future state, and envision a full withdrawal of Israeli soldiers and settlers.