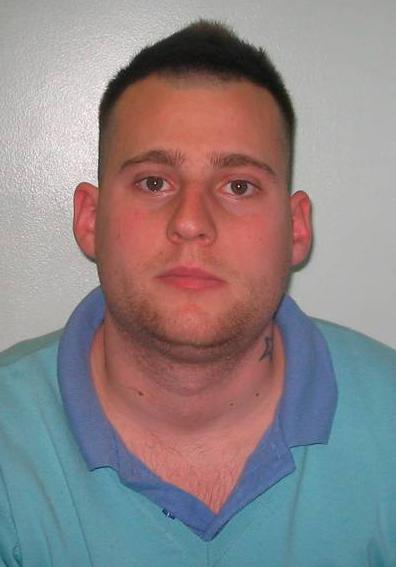 Three men who joined a hooded and masked gang to attack Kingston Mosque with sticks and bottles have been jailed today. Judge Geraldine Kent overturned their pleas for leniency after hearing that all three men still denied being involved in the attack on November 21, 2010.

David Morris, 21, bought the bacon later strewn over the mosque and was caught out when he photographed co-defendant Alfie Wallace holding a stick. He was sentenced at Kingston Crown Court to six months imprisonment for racially aggravated criminal damage.

Racist Alfie Wallace, 19, was sentenced to a total of 12 months in a Young Offenders Institution for religiously aggravated criminal damage and violent disorder. The court heard he had shouted out “I’m being arrested by a black man” in connection with another earlier offence.

Martin Pottle [pictured], 24, was sentenced to a total of 14 months in prison for religiously aggravated criminal damage and violent disorder. He had lied to police to try and pretend he was nowhere near the mosque before admitting during the trial that he was.

CCTV from a mosque camcorder identified him as among the fleeing gang by a distinctive streak in his hair. He was on bail for affray when he joined the attack.

Some of their acquitted former co-defendants in the trial, Paul Abley, Jordan Ellingham, Adam Khalfan and James Stacey watched from the public dock.

The court heard from Morris’ defence counsel Mr Robertson that he was polite and helpful and said it was a borderline case for prison.

Wallace’s counsel Miss Macatonia said he was only 17 when the attack took place and he had a scheme connected with the Olympics to help young people with right-wing views.

And Mr O’Toole representing Pottle said since he completed a six month prison sentence for affray he had a child with his girlfriend and wanted to turn his life around.

But delivering her verdict Judge Geraldine Kent said: “You had no legitimate reason to go to the mosque at all. This is not a case of a legitimate protest that spiralled out of control.

“The attack on the mosque was an unprovoked attack against innocent people inside the mosque and it frightened members of the public who should be able to go about their daily lives in a residential street without fear.”

As we have noted before, Pottle, Abley and Ellingham are all associates of former EDL youth leader Joel Titus. The six month sentence for affray that Pottle served was as a result of a fight between rival gangs of football hooligans in 2010 that also led to the jailing of Titus and Abley.