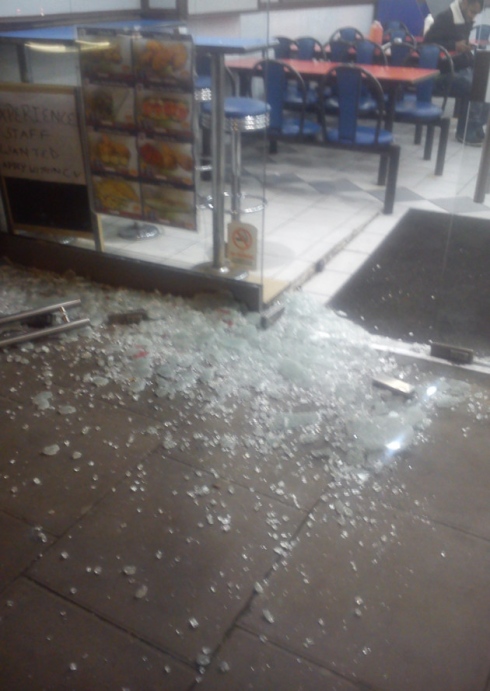 A Muslim family are in shock after their fried chicken shop was viciously attacked last night by vengeful thugs following the murder of a soldier in Woolwich.

Two men entered Dixy Chicken on Green Street, Upton Park at 9.30pm where staff claim they banged on the serving counter, shouting, “You killed one of our soldiers, we’ll kill you” before vandalising the shop.

Shabbir, who helps run the family business after his father Gulam died in March, said they did their best to patch the shop up and opened for business again today because they couldn’t afford not to.

Shabbir said: “My Dad was 78-years-old when he died and he worked every day of his life. I am glad that he passed away and he wasn’t in the shop last night to see that. A lot of good people come into the shop every night and they always say what a great man my Dad was. But on top of losing him, we really didn’t need this.”

The heavy glass doors in front of the shop were smashed and Shabbir estimates the men caused thousands of pounds of damage while he also lost a night’s business, having to throw food away.

Shabbir, who recently suffered a stroke and a heart attack, added: “The police were with us for quite a while last night and I haven’t slept very much, I’m exhausted. My life flashed before my eyes – if they had got over the counter, I don’t know if I’d have been strong enough to fight back. I’m scared, I am nervous about going in. My sister Shahanz was quite shaken up but I said to her, we can’t let these people ruin our lives, we will not allow them to get to us.”

Police attended the scene and two men have been arrested for public order offences and criminal damage.