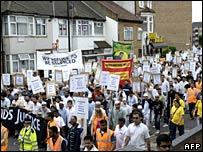 Thousands of protesters led by members of the family caught up in the anti-terrorist raid in east London two weeks ago demanded an apology from police yesterday for their “barbaric and unacceptable” treatment.

The march ended in a demonstration outside Forest Gate police station, where protesters attacked the leaking of “lies and misinformation” after the arrest and questioned the failures of intelligence which led to the disastrous raid.

“The police are doing their job, but they should be doing it properly,” said Muddassar Ahmed, a spokesman for the march organising committee. “The intelligence agencies have much more to answer for.”

March organisers estimated that 5,000 gathered for yesterday’s protest, which was the first mainstream demonstration to take place near the scene of the raid. It drew together a diverse coalition including moderate Muslim groups, Respect, the Conservatives and Stop the War.

Two elderly white women wearing floral print dresses mingled with women in hijab and men in white shalwar kameez. One of the women, Madeline Channer, 63, said: “The police were very heavy-handed and abused these two young men. I was brought up to respect the police but this sort of behaviour eradicates that respect.”