Fears are growing of trouble in Walsall next weekend after it was revealed that the English Defence League are to mount a demonstration in the town centre – while groups opposing the far-right group are also planning an event in the town.

West Midlands Police said they were aware of the planned protest due to take place in the town centre on Saturday, 29 September, 2012.

A spokesman said: “As on previous occasions, the police have no power to ban a static protest – in fact the right to protest peacefully is a sign of a healthy democracy and West Midlands Police has a positive duty to facilitate that right.”

Update:  See also EDL News and Blottr, who have reported that Rowley EDL member Kevin Smith has posted some threatening-sounding comments on Facebook – “One week to go till the EDL come rolling in to walsall to show whos streets these are … god help any scum or old bill who think they r going to stop us” – accompanied by a profile picture with the slogan “F*ck calm Walsall demo is coming!”.

Smith was convicted of religiously aggravated harassment in July 2010 for putting a pig’s head on the wall of Dudley central mosque. Yet he has since appeared in public with an EDL Rowley Division banner prominently featuring the slogan “Muzzie scum” (see photo below, with Smith on right). Surely there’s a strong case here for a further charge of religiously aggravated harassment. Or do the police take the view that abusing the Muslim community by parading through the streets with a banner like that is “a sign of a healthy democracy”? 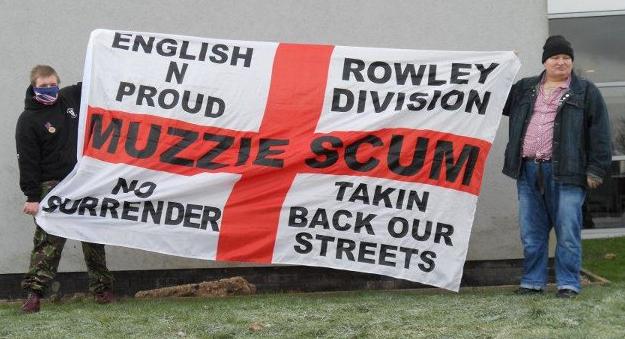