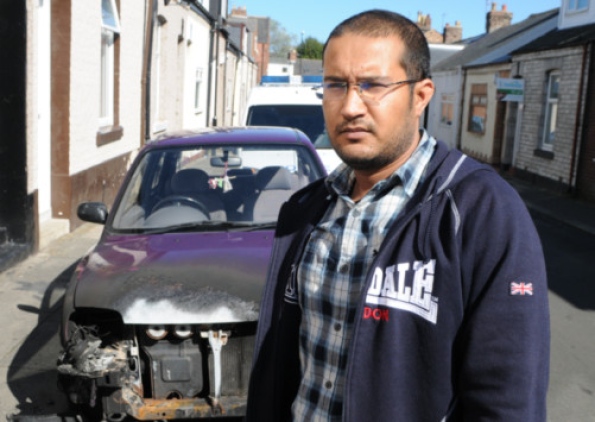 His car a burnt-out shell, student Usman Chaudhry fears he is the target of racist thugs. The 28-year-old’s Nissan Micra was one of two cars destroyed by arsonists in one weekend. He woke up at 5.30am to see his car on fire outside the house he shares with friends in Pensher Street, Millfield.

Police were first on the scene, but firefighters were already dealing with another blaze in the next street.

Mr Chaudhry, who has lived in the city for 11 months, said: “I was up early because I was preparing for a project. I heard a noise outside and saw my car was on fire. I called the police and woke up my friends who I live with and they extinguished the fire.”

Takeaway shop worker Hussain Mohammad was woken by fire crews putting out a blaze in his Peugeot 306 in Offerton Street. The 27-year-old Iranian national said: “I got up at about 6.30am and the fire engines and police were there. The whole engine was burnt-out.”

No one was hurt in the fires.

The men fear they could have been targeted because they are Muslims. Mr Chaudhry is from Pakistan, but moved to the UK to study at Sunderland University. “Both cars are owned by Muslims and Asians,” he said. “There was a big protest against the mosque. I’m friendly with everybody in the street so everybody knows I’m a Muslim.”

However, police said there is no evidence the arson attacks were racially motivated.

Trouble has flared in the Millfield area after Sunderland City Council granted planning permission to turn an empty transport depot into a mosque. Members of the BNP and anti-fascists have gone head to head in demonstrations near the site in St Mark’s Road in recent weeks.

Sergeant Louise McLennan said: “Now that we have been made aware of the car owners’ concerns we will be visiting both men to address those concerns. Although there is nothing to suggest at this stage that the owners of these cars have been specifically targeted, I would like to reassure people that there’s no place for any sort of hate crime in our area and tackling it is a priority for the force.”

Anyone with any information about the incidents, which took place on Sunday, September 2, is asked to contact police on 101 ex 69191.

It was in fact the North East National Front rather than the BNP who organised the protest against the proposed mosque. The NENF have now split from the parent body and have formed a new organisation, the Northern Patriotic Front.