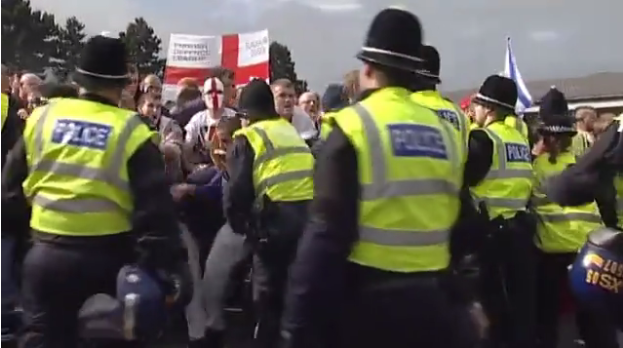 Supporters of the English Defence League charged police lines and hurled missiles when the right-wing group held a demonstration in Sheffield today.

Hundreds turned out for the rally at Sheffield Lane Top, which was sparked by now-abandoned proposals to turn The Pheasant pub on Barnsley Road into a mosque. A counter demonstration was also held by Unite Against Fascism and One Sheffield Many Cultures.

Police said around 400 EDL supporters attended, with 250 involved in the counter-protest, while four arrests were made – two for drunk and disorderly, one for criminal damage to a police vehicle and one for possession of cannabis.

There was a heavy police presence throughout North Sheffield this afternoon. As well as officers from South Yorkshire Police, backup was drafted in from forces across the north of England, including Greater Manchester, Humberside, Merseyside and Northumbria. Roads around Sheffield Lane Top were closed as the EDL group walked from Parson Cross to Elm Lane, where they were contained by police in front of a row of shops. The counter demonstration was held further away on Hatfield House Lane.

As the rally got under way, chanting EDL supporters rushed towards police, who waved batons and forced back the protesters, some of whom threw empty drink cans. Officers with riot shields were brought in, as well as police on horseback, to prevent further disorder. English Defence League leader Tommy Robinson appealed for calm and gave a speech, saying: “We don’t want any more mosques in this country.”

Meanwhile, the UAF and One Sheffield Many Cultures waved placards and banners, chanting “EDL go to hell” and “This is our city”. The protests finished at around 3pm.