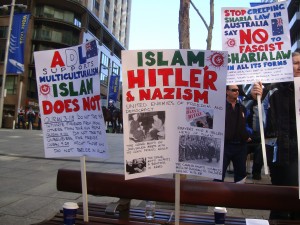 The massed ranks of the Australian Defence League rallied in Sydney on 30 July to protest against sharia law. Judging by photographic evidence, there were fewer than 40 of them.

A contributory factor in the poor turnout might possibly have been that the ADL’s leader Martin Brennan has been arrested and is currently held in a detention centre facing charges of being an illegal immigrant.