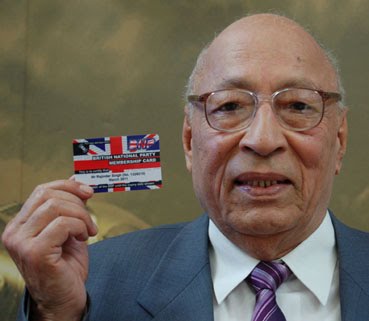 Only the British National Party can save Britain from the terror of Islamist colonisation and protect the identity of the British people, said Sikh activist and the first ethnic member of the party, Rajinder Singh, today.

Speaking after being given his party membership card, Mr Singh said he was determined to ensure that the BNP’s “message was heard without distortions and lies”.

“All of the other parties follow policies which will result in the Islamification of Britain,” Mr Singh said. “Already there are over 85 sharia law courts operating in Britain, all with legal force and recognised by the state.

“Sharia law is becoming entrenched in financial institutions as well. This is the direct result of the policies followed by Labour, Conservative and Lib-Dems who have encouraged Islamic immigration,” Mr Singh said. “I know first-hand the results of Islamist colonisation. I saw what happened to my homeland when it was overrun by Islamists and I do not want that horror visited upon Britain.

“This is tied up very closely to the question of the identity of the British people. I am a Sikh and proud to be so, and I respect and support the right of British people to be proud of who they are, and their right to remain the majority population in their homeland.

“No one in India would want that subcontinent to become majority Chinese. The Indian people would reject that as colonisation, which it would be. The same goes for Britain,” Mr Singh said, adding that there was a huge difference between small-scale immigration and what is happening today in Britain.

BNP leader Nick Griffin welcomed Mr Singh’s announcement, calling it a “brave step for truth”. “Mr Singh, for whom I have the greatest respect and the pleasure to have had as a friend for many years, knows the truth about the BNP, and we welcome his support in the common struggle against the Islamist menace which threatens all lands and people.”