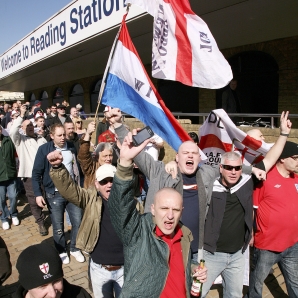 Three political leaders in Reading have united to condemn a march by the English Defence League (EDL) through the town centre.

About 200 supporters of the organisation took part in a demonstration against the “Islamification of England” on Saturday afternoon. Political leaders on Reading Borough Council have accused the group of trying to stoke up hatred and division.

Reading Council for Racial Equality (RCRE) sent member George Mathew to observe the demonstration after police advised them not to demonstrate themselves. Mr Mathew said:

“We went there with the assumption there would be between 30 and 50 people so we were really shocked by the sheer number of them. It was really scary and there were people around who were trying to do their normal shopping who were shocked by it. For me, the most disappointing, or scary, thing was that there were people who were not part of the demo who came from the crowd and joined them. That was unexpected and it made us feel very uneasy.”

Conservative Reading Borough Council leader Andrew Cumpsty said the town has excellent relations between its varied communities. He said: “Hatred and division have no place in civilised political debate and I condemn the activities of this small minority.” Deputy council leader Cllr Kirsten Bayes said: “The antics of a marginalised, discredited group such as this have no relevance to Reading. They should go home.”

And Labour group leader Cllr Jo Lovelock said: “People who come to Reading with the sole intention of stirring up racial hatred and driving a wedge between different communities must be given a clear message that they are not welcome and their hateful approach will be rejected by all who value tolerance and diversity.”