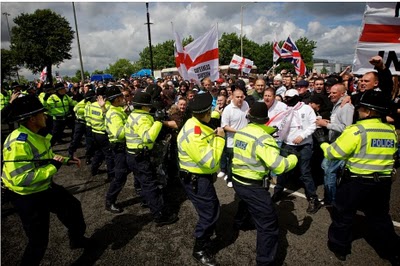 Detectives investigating disorder which broke out during an English Defence League protest in Dudley have released CCTV images of men they want to identify.

West Midlands Police said officers were continuing to investigate criminal damage and other offences committed during disturbances in the town centre on July 17.

The CCTV stills, taken on the day of the EDL protest and a counter-demonstration, show 22 individuals whom detectives wish to trace.

Homes in the Alexandra Street area of Dudley were attacked during the violence, which also saw damage caused to parked cars, restaurants and a Hindu temple.

Detective Inspector Carl Southwick, who is leading the investigation, said: “We are appealing to members of the public to look closely at these images.

“We are committed to identifying those responsible for the pockets of disorder and criminal damage that took place in Dudley town centre.”