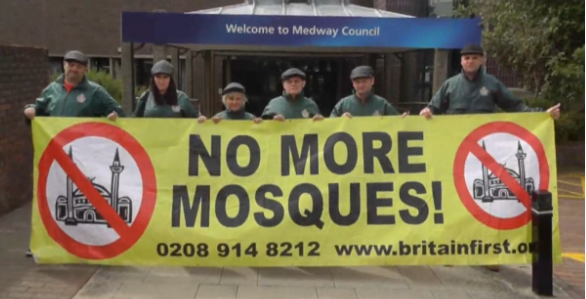 A right-wing group descended on two mosques in Gillingham threatening action if a planning application for a new place of worship is not withdrawn.

It comes after Britain First went to the new Nasir Mosque in Richmond Road, Gillingham, and the Jamia Mosque in Canterbury Street, Gillingham. The group of seven, clad in green raincoats and flat caps, confronted a solitary man on the doorstep of the Jamia Mosque before going inside and tackling him and another man on issues including the segregation of men and women within the mosque.

Police are now investigating the incidents.

In a video shot by Britain First and uploaded to YouTube one of the group said: “Withdraw your application for a new mosque, ok? Otherwise we, Britain First, will run a big campaign against you guys personally and also the council and the Imam, yeah? You’ve got a mosque, yeah. We don’t want these huge mosques with domes and minarets in our towns with separate entrances for men and women in our country.”

The planning application for a new mosque to replace Jamia in Canterbury Street has been delayed because of controversial parking issues. The new mosque would be in Croneens car park next to Gillingham railway station and will feature a 92ft minaret.

Letters of objection have been sent in by commuters who use the council-run car park and are angry about the loss of spaces. The application is recommended approval by council officers, but has been delayed by members of the planning committee who echoed residents’ concerns.

Anwar Khan is the portfolio holder for Community Cohesion at the Kent Muslim Welfare Association, the group behind the application, and said: “The police have taken this seriously and are looking for the people to speak to them. Our concern is that these people are not youths, they are not just throwing stones and doing a runner. They are middle aged and people like that are likely to get more momentum.

“But life is going on as normal. We’ve been through a lot of difficult times in the past so this doesn’t really discourage or frustrate us. I know most people don’t really feel like they do. There have been objections to every mosque in this country, as long as everything is legal I don’t see it going wrong. We’re hopeful and staying positive we will get the planning permission.

“We have been in Canterbury Street for four decades and enjoy great support from other religious groups in the community, including the churches and the synagogues.”

Britain First has almost 500,000 Facebook followers – more than the Conservatives and Labour combined. Islam has over three million.

A spokeswoman for Kent Police said: “There are two reported disturbances at mosques in Gillingham on June 26 between 3pm and 3.30pm. Officers are making enquiries to establish the circumstances and whether any criminal offences have been committed.”