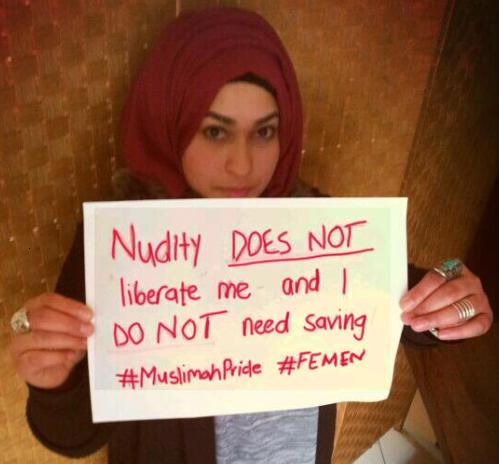 A group of Muslim women has launched an online campaign in response to demonstrations by bare-breasted activists staged in front of mosques and Tunisian embassies across Europe.

The “Muslimah Pride Day” was organised in response to the Ukrainian women’s rights group Femen’s self-declared “Topless Jihad Day”, a day of topless protests around the world to support Tunisian activist Amina Tyler.

Organiser Sofia Ahmed, writing on Facebook, said: “Muslimah [Female Muslim] pride is about connecting with your Muslim identity and reclaiming our collective voice. Let’s show the world that we oppose Femen and their use of Muslim women to reinforce Western imperialism.”

Using social media sites, some Muslim women have posted photographs of themselves holding placards with messages to Femen such as “Nudity does not liberate me – and I do not need saving” and “Femen can’t tell me what I can and can’t wear”.

The Femen rallies on Thursday targetted the case of Tyler, who sparked a scandal last month when she posted pictures of herself online with the words “My body belongs to me” emblazoned across her bare chest.

“Topless Jihad Day” was celebrated in capitals such as Berlin, Kiev and Paris.

“We’re free. We’re naked. It’s our right. It’s our body. It’s our rules and nobody can use religion, [or] some other holy things, to abuse women, to oppress them,” Femen member Alexandra Shevchenko said at a small demonstration in front of a Berlin mosque amid near-freezing temperatures.

Police in Kiev detained two young activists with “Free Amina” on their exposed chests immediately after their arrival in front of the city’s only mosque.

Around two dozen topless feminists in Paris whose bodies were tagged with “No Islamists” and “No Sharia” tried to approach the Tunisian embassy but were deterred by police as they emerged from the subway, according to a photographer with the AFP news agency.

In Brussels, a small group of women stripped to the waist gathered in front of the Grand Mosque shouting “Free Amina”, while three protested briefly outside the Tunisian consulate in Milan.

And Roqayah Chamseddine, “‘FEMEN’ and the suppression of native voices”, Mondoweiss, 6 April 2013 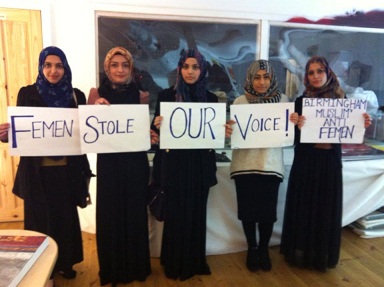