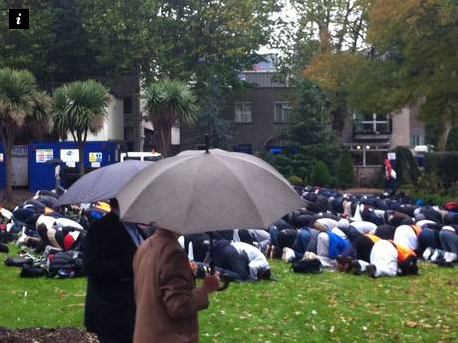 Hundreds of students at Queen Mary University in London, braved the rain today to pray outside, in protest against what they claim is inadequate resources for Muslims on their Mile End campus.

It was their second ‘prayer protest’ in two weeks, with the student union counting 350 demonstrators last Friday. Muslims account for 20 per cent of the student body, according to Islamic Society representatives.

Previously, the college’s 20-year-old Islamic Society had been able able to book several large communal spaces for congregational Friday prayers. But from the start of this academic year, students have been told the rooms are unavailable.

Principal Professor Simon Gaskell suggested students attend local mosques for the mass prayer, and denied any change in policy. “We say we’re here to accommodate private acts of worship… like most universities we are very pressed for resources,” said the Principal, adding that the facilities are unavailable due to demand.

However, Isoc dismisses this claim, saying that they carried out spot checks on the Great Hall and Octagon, rooms they were told were unavailable for booking, only to find them empty. They also say that local mosques are oversubscribed.

Shahala Ahad, an engineering student, described the overcrowding of university-provided prayer rooms on Fridays, saying that stairs and hallways are rammed. “We are grateful for what the university has provided,” said Awo Abib, who graduated last July, “but the facilities don’t reflect the demographic.”

Queen Mary Student Union president Sarah Sarwar, leant emphatic support to the campaign. “We really believe it’s the university’s responsibility,” she said. Progress in negotiations has been “positive so far.”

After leading today’s prayers, Alamgir Islaam, the president of Isoc, told the Independent: “In order for the university to be in accordance with their claim to be inclusive to all faiths… they must take into consideration that this prayer must be performed in a certain way.”