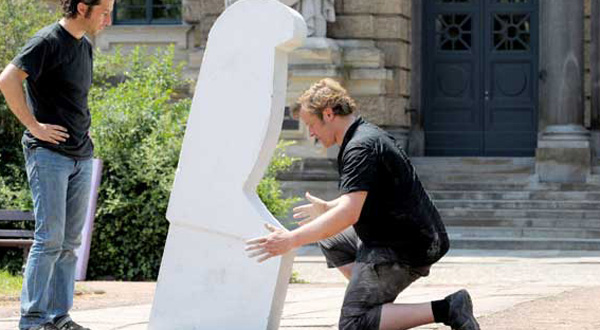 Vandals have attacked an art project erected in honor of Marwa El-Sherbini, a pregnant headscarved Egyptian woman who was murdered in a German court room, organizers said Friday.

The Citizen.Courage group, which sponsored the display in the eastern city of Dresden, said that a few knife-shaped columns used in the open-air show had been knocked over several times and signs explaining the project were stolen.

“Citizen.Courage assumes this was a malicious, politically motivated attempt to destroy the project,” group chairman Christian Demuth said in statement. To warn against everyday racism, we will not restore the destroyed installations. But we will continue the project.” A police spokeswoman said authorities had opened an investigation.

During a trial last July, a Russian-born defendant suddenly attacked Sherbini – who was Muslim and wore a headscarf – plunging an 18 centimetre kitchen knife at least 16 times into her while she was three-months pregnant with her second child. Her son, Mustafa, three years old at the time, watched her bleed to death at the courtroom.

Sherbini’s husband, Egyptian geneticist Elwy Okaz, rushed to her aid but was also stabbed repeatedly and then shot in the leg by a police officer confused about who was attacking whom.

The 28-year-old assailant, who was sentenced to life in prison, attacked her out of revenge after she pressed charges against him for calling her a “terrorist”, “Islamist” and “whore” during a dispute over a playground swing.

The killing, and the initially muted reaction of Germany’s politicians and media, sparked outrage in Sherbini’s home country, as well as in the wider Muslim world. Many newspapers dubbed her the “veil martyr” after her headscarf.

The “18 Stabs” installation, unveiled on the first anniversary of Sherbini’s death on July 1, featured 18 knife-shaped concrete pillars erected throughout the city with signs condemning racism and xenophobic violence.