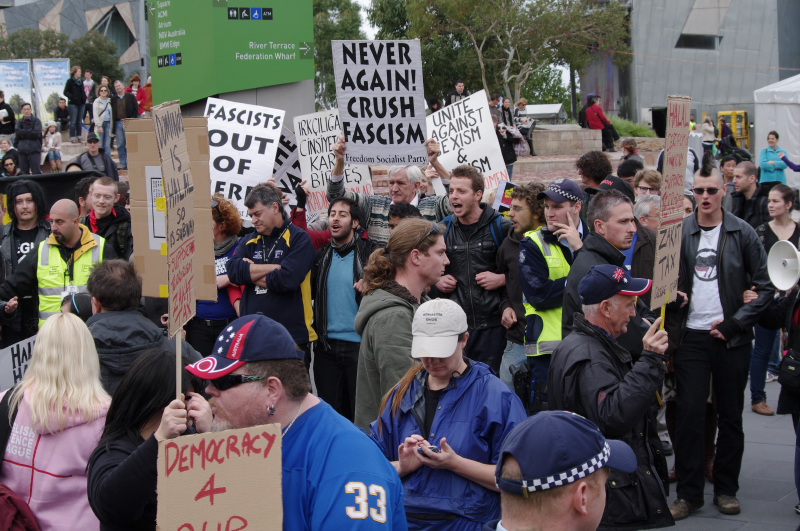 Muslim groups are worried by a new nationalist organisation that claims Australia is in danger of being Islamicised.

Australian Defence League supporters clashed with Left-wing protesters in the city yesterday as the group held its first local rally, sparking a warning from the Baillieu Government that bigotry would not be tolerated. A small team of police initially kept the groups apart, but ADL supporters were forced to end their protest early when activists encircled them and tore up placards.

The ADL is an offshoot of the English Defence League, which has staged demonstrations in areas of high Muslim concentration in the UK.

About 40 ADL members, including women dressed in mock hijabs, protested in Federation Square yesterday over issues such as the certification of halal meat and concern sharia law would be introduced.

Protest organiser Martin Brennan claimed the group had 1400 members but denied it was anti-Muslim. “We are not racist whatsoever, we are against radical Islam infiltrating Australia,” he said.

Australian Federation of Islamic Councils president Ikebal Patel said the group was provocative and wrong to believe that most Australian Muslims wanted to bring in sharia law. “It’s of great concern that anyone is out there trying to disrupt the peaceful social fabric of Australia,” he said. Islamic Council of Victoria spokesman Nazeem Hussein said the ADL’s views were uninformed and saddening.

State Multicultural Affairs Minister Nick Kotsiras said the Government did not tolerate racism, bigotry or the incitement of hatred. “Activities which undermine the multicultural harmony of Victoria will be dealt with swiftly,” he said.

The ADL protest was swamped by the much bigger group of activists and unionists who shouted anti-racism slogans. Anti-racism protester Mick Armstrong, from Socialist Alternative, said the ADL was trying to copy the tactics of its British counterpart. “They have had their protest and we have ended it,” he said.