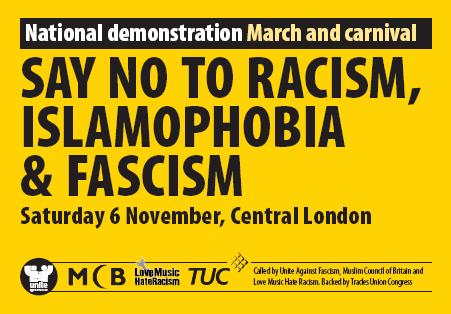 The general secretaries of the GMB general union and the UCU lecturers’ union have both signed up to support the national demo against racism, fascism and Islamophobia on Saturday 6 November.

Backing from Paul Kenny and Sally Hunt means that the leaders of 14 trade unions, representing millions of workers, have now signed up to support the demo called by UAF and backed by the TUC, the Muslim Council of Britain and Love Music Hate Racism.

Labour leadership rivals Ed Balls and Diane Abbott are also among those who have signed the statement backing the march and carnival, which will take place in central London.

We, the undersigned, are deeply concerned by the rise in fascism, Islamophobia, antisemitism and racism. The English Defence League has organised events across the country, stirring up hatred, Islamophobia and racism – running riot in some cases and provoking violent attacks on Muslim, black and Asian communities and on Mosques and Mandirs (Hindu temples).

Alongside this the British National Party has received unprecedented electoral support for a fascist organisation in Britain.

Despite losing many council seats in the elections this year, the BNP’s share of the vote overall continued to rise and it has two elected members of the European Parliament.

This is in the context of a wave of Islamaphobia and racism in Europe and the USA, including threats to burn copies of the Qur’an, attacks on Mosques and Islamic cultural centres, bans on Muslim women’s full-face veils and the construction of minarets. In France, the Roma people have been singled out and subjected to mass expulsions.

Now, more than ever, we must unite to turn back this tide of hatred.

We stand against the rise of racism, fascism, Islamophobia and antisemitism and support the demonstration on Saturday 6 November.