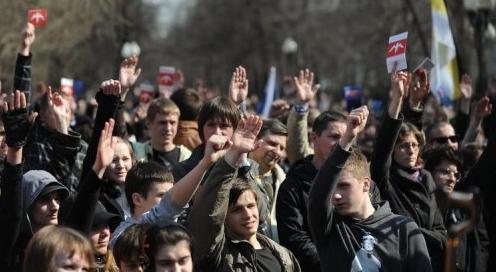 Hundreds of Russian nationalists staged a racism-tinged rally in central Moscow on Saturday to demand an end to social payments for Muslim republics of the volatile North Caucasus region.

The sanctioned gathering came amid spiking social tensions and lingering security fears from a January suicide bombing at the main Moscow airport that killed 37 people and was claimed by the nation’s most feared Islamist warlord.

“We are tired of seeing the Caucasus youth creating mayhem on our streets and at our schools and universities and then going unpunished,” rally co-organiser Alexander Khromov told the Interfax news agency.

The event was officially titled “Stop Feeding the Caucasus!” and included leaders from far-right organisations that rights groups link to deadly attacks on migrants from Russia’s Caucasus and the Central Asian republics.

Recent polls have shown a rise in Russian xenophobia and a sense of voter frustration over the influx of mostly Muslim newcomers to cities that are already creaking under the strain of heavy crime and poorly-funded services.

Several covered their faces with bandannas to hide their identities from the police while many more raised their right arms in Nazi-style salutes while chanting slogans in praise of ethnic Russians.