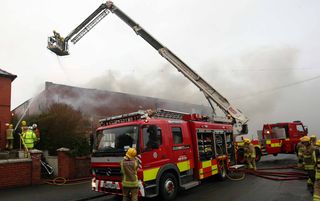 Fire crews are tackling a blaze at Shotton Lane Social Club and about 100 people have been evacuated from their homes.

North Wales Fire and Rescue Service said properties around the fire were evacuated after the alarm was raised shortly after 4am, and residents have been moved to Deeside Leisure Centre in Queensferry. Firefighters from Deeside, Flint, Mold, Rhyl, Holywell and Wrexham were called out.

Flintshire Muslim Cultural Society is trying to raise £150,000 to buy the Shotton Lane Social Club and turn it into an Islamic centre. The plans have provoked strong protests and about 100 members of right-wing group the English Defence League marched through the streets of the town last month to voice their opposition.

Deeside Leisure Centre manager Mike Walsh said of the evacuees: “They’re bearing up, lots of other people have made their way to friends and family. They’re being looked after well.”

A North Wales Police spokesman said a joint fire and police investigation is under way to establish the cause of the fire. There are no reported injuries at this stage.