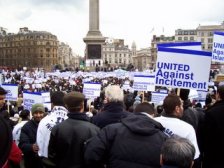 Richard at Lenin’s Tomb takes issue with the initial BBC report that no more that 4,000 attended the rally in Trafalgar Square. He writes:

“It was easily much larger than the four thousand being claimed by the media, but probably not the forty thousand claimed by the organisers. At a pinch, and based on previous demonstrations in the same location, I would guess it was around 10-15,000 at its peak. That’s a large turnout by anyone’s standards. And the square was packed, and overflowing, and loud. And what is more, I’ve noticed the coverage of the protest on teevee appears to be speaking of the putatively low turnout (‘only a few thousand’) in connection with the organisers’ aims of expressing anger about the cartoons in a peaceful manner that represents mainstream Muslims. Well, excuse me, but how many turned out for the Danish Embassy protest in Knightsbridge last week? The one that caused all the offense and got acres of newsprint and hours of television coverage? A hundred? If that. A small protest organised by a phone-box organisation, and probably half of those were intelligence assets. That’s worth media alarm. Thousands of British Muslims denouncing Islamophobia in a dignified and impassioned way and all it’s worth is a few seconds, some unflattering footage and a mournful sigh from the journalist. Okay, I get it: if it isn’t panto Evil Doers, it isn’t news.”