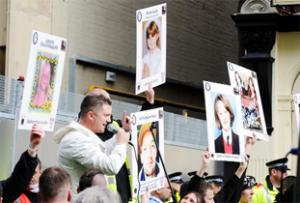 The family of a grandmother killed in a hit-and-run have condemned the English Defence League for using her image on placards.

Freda Holt was one of several local faces used by 2,000 EDL protesters during Saturday’s town centre demonstration. The grandmother from Revidge Road, Blackburn, died after being knocked down by speeding unlicensed and uninsured driver Salim Chand last November. Chand, 27, was jailed for nine years. The EDL said it was highlighting “hit-and-runs by Muslims”.

But Freda’s husband Ray Holt, 72, said: “It would have been the very last thing Freda would have wanted. She was all about live and let live. She would have been absolutely horrified. As far as I am concerned he (Salim Chand) was an idiot driver. It’s got nothing to do with him being a Muslim.

“I had no knowledge of it and nobody had approached me to ask. I was in the town centre on Saturday but fortunately left before the protest because I don’t know what I would have done if I’d have seen her picture being used by the EDL.”

On Sunday, the family went to Mass and prayed for Freda and then put flowers on her grave at Pleasington Cemetery to mark what would have been her 71st birthday and Mother’s Day.

Eldest son Richard, 45, said he was shocked when he realised on Monday what had happened.

He said: “As a family all we wanted was justice for our mother regardless of race, colour or creed. The use of my mother’s picture was neither given permission for, or condoned, by us.

“My mother was a devout Catholic and would accept and help anyone, should they require it, which she had done countless times in her life. This is absolutely not what our mother stood for. As a family we do not wish to be linked in any way with EDL or any similar organisation.”

Freda’s daughter Rachel Harling, from Rishton, said she has seen the picture on an EDL website and felt “quite sick”. She said: “It was nothing to do with race or religion. It could have been anyone behind the wheel.”

Paul Houston, the father of 12-year-old Amy Houston, whose image was another of those used by the EDL, has also distanced himself from “extremism”.

You really do wonder what the EDL leadership have in the place where most people have brains. How could they have failed to anticipate that using photos of road accident victims without permission would cause outrage to the victims’ families and backfire badly on the EDL? It is also difficult to see how this squares with the EDL’s claim that they are against Islam rather than Muslims. Is there perhaps a Qur’anic verse that authorises hit-and-run driving?

Update:  Now the story has been taken up by the Daily Mail.