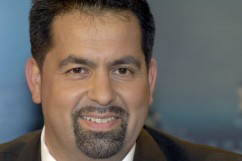 A prominent German Muslim leader expressed serious concern over the growing anti-Islam hysteria in his country, fuelled by right-wing populist politicians and the media.

Meeting with the Berlin-based foreign press Wednesday evening, the chairman of the Central Council of Muslims, Aiman Mazyek said, “I am concerned about the situation which we are facing.” He pointed out the animosity towards Muslims was “the fastest growing form of racism” in Germany. Mazyek said Islam bashing had become “socially acceptable,” even in German intellectual circles.

He added it was “frightening” to note that most Germans would support restricting the religious freedom of Muslims, according to a recent survey released by the Friedrich-Ebert Foundation, affiliated to the opposition Social Democratic Party (SPD).

Mazyek warned that this hysterical anti-Islam debate would “ultimately damage Germany.” He criticized the nation’s media for not seriously questions some of the baseless assertions made about Islam. The official emphasized that it was “the duty of German society as a whole to confront this form of racism.”

The activist lamented the fact that German Muslims were facing “daily discrimination and hostility.” He referred to examples of an ongoing wave of anti-Muslim violence, including the recent brutal murder of an Iraqi Muslim by two neo-Nazis in the eastern city of Leipzig and the series of “almost monthly attacks against mosques” throughout the country. Mazyek said he had also received death threats and hate mail from right-wing populists.

He urged the government to address the challenge of Islamophobia before its gets out of control.