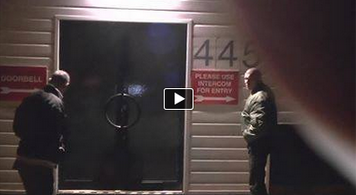 Among the alliance of far-right groups who organised an anti-mosque protest in Lincoln last Saturday, during which protestors marched through the city chanting “burn the poppy we will burn the mosque”, was the English Volunteer Force.

A breakaway from the English Defence League launched by “John Sheridan” (former BNP activist and EDL co-founder Chris Renton), the EVF shares the EDL’s aim of resisting “the Islamification of Great Britain”, but it combines this with a more traditional far-right racist approach, extending its hatred of Muslims to all cover all communities of recent migrant origin. Last July the EVF organised a demonstration outside the Croydon headquarters of the UK Border Agency to protest against “Islamic, African and east European immigrants” who it claimed “suck and bleed our country dry”.

The EVF’s next main event is a far-right unity protest outside the houses of parliament in March. In the meantime, they have decided to target a mosque in Croydon.

EDL News reports that several EVF activists have posted a video of themselves outside a building in Brighton Road attempting to harass the occupants, while declaring to camera that “this here is an illegal mosque, there’s no council permission”. As EDL News points out, this is just nonsense. Planning permission for the use of the premises as a place of worship and non-residential education/training centre with an ancillary cafe was granted three years ago.

The video concludes with the EVF threatening to return to the premises on Friday, presumably to abuse worshippers entering the building, though the details of the plan are unclear. As EVF activist Alfie Smith comments on Facebook, “we dont want to spoil the surprise for the muzzies”.

EDL News writes: “We think that anyone who lives in this country has the right to go about their daily worshiping without fascists harassing them so we have handed our dossier over to the Metropolitan Police.” So if the EVF do turn up on Friday, hopefully there will be some arrests.