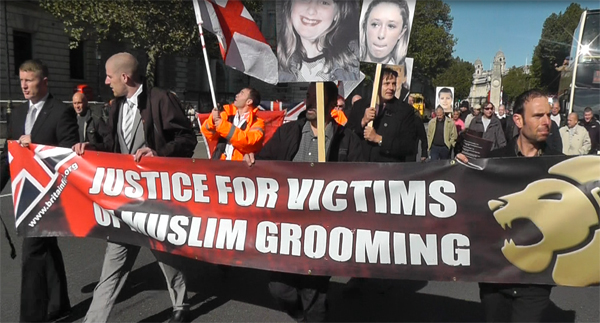 The Sunderland mosque protest wasn’t the only far-right anti-Muslim demonstration in the UK yesterday. Britain First, a small fascist grouping led by former British National Party councillor Paul Golding and the party’s ex-fundraiser Jim Dowson, held a protest in London demanding “justice for victims of Muslim grooming”. They demonstrated outside Downing Street before marching down the road to Parliament Square where they burnt a Saudi flag. (There is of course a clear connection between the Saudi monarchy and the disappearance of Charlene Downes in Blackpool.)

Britain First claims that their demonstration was attended by “around 80-100 patriots, from several organisations”. Judging by the photographs on their own website it looks like no more than a couple of dozen were there. However, Paul Golding’s claim that a “disciplined delegation from the English Defence League” was among those participating is interesting, given that other organisations that were represented included the BNP and the ex-EDL breakaway group the Infidels. According to Hope Not Hateanother participant was the veteran neo-Nazi Eddie Stamton, who a year ago was proscribed by the EDL, along with the Infidels.