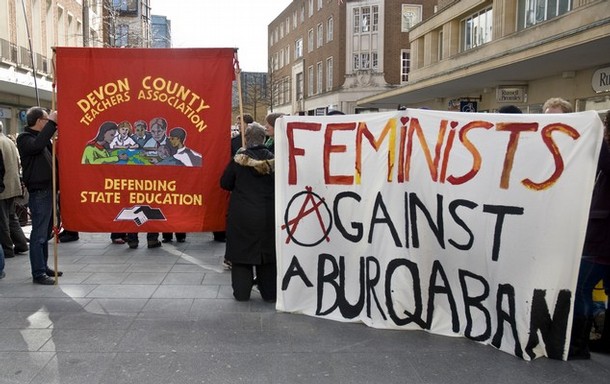 The Exeter division of the racist English Defence League was humiliated in Exeter today. Just 15 racists turned up to a “Ban the Burqa protest” in the Devon city.

In contrast, up to 300 people took part in a celebration of diversity on the streets of Exeter to show the EDL’s politics of hate and division are not welcome there. People came in and out of the event, which had local speakers and children’s activities.

The antiracist event brought together people from all different beliefs and backgrounds – Christian ministers, people from the mosque and the synagogue. Lord Mayor Marcel Choules sent a message of support. Members of Exeter Labour Party, the Green Party and the Liberal Democrats attended.

The celebration was supported by the Devon branch of the National Union of Teachers and the Exeter Anti Cuts Alliance. There was a “Feminists against the Burqa Ban” banner along with many others.

Children’s activities were organised by the Woodcraft Folk – a poster where children drew flags of the world was very popular, along with making friendship bracelets and a “We Love Exeter” poster.

Speakers from UAF, the Woodcraft Folk and the Exeter Anti Cuts Alliance addressed the crowd. A student from Egypt spoke about the victory of the Egyptian people over the country’s dictator and about how Muslim and Christian protesters had stood side by side in Cairo’s Tahrir Square.

The well organised, peaceful and uplifting celebration of diversity was very different to the racists’ protest. At the start of the diversity event, 10 of them turned up unannounced, seeking a confrontation. They seemed to be taken aback by the number of people who had turned out to oppose them.

The EDL were led away by police and then stood for an hour in the High Street where they were barracked by members of the general public before retreating to a pub.

Today was a great day for Exeter, for antiracism and for all those who oppose prejudice. The EDL were humiliated – they claimed on their Facebook page that over 100 would attend their event – they only managed 15. It was great to see Christians, Jews and Muslims standing together side by side to oppose the EDL.

The EDL’s claims that Muslims are going to impose Sharia Law on Britiain is laughable – Muslims make up only 2.7% of the population. Today the people of Exeter showed that the EDL’s politics of hate are not welcome here and will be challenged whenever it arises.