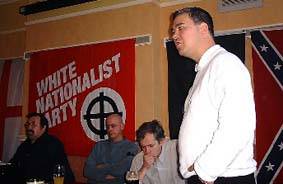 The implosion of the BNP can be expected to open up some political space in which other right-wing xenophobic parties will be able to grow.

While the main beneficiary will probably be UKIP, small parties of the far right may also find their political prospects have improved with the decline of effective competition from the much larger BNP. In that context it is worth noting a piece by Tony Whalley on the Stoke-on-Trent blog Pits n Pots about two former BNP members who are are expected to stand for the fascist England First Party in the local elections in Stoke this May.

The EFP was founded in 2004 by Mark Cotterill (pictured), the former chairman of American Friends of the BNP which served as a financial conduit to the BNP from its supporters on the US far right. After being banned from the US and forced to return to the UK, Cotterill fell out with the BNP leadership and left to join the White Nationalist Party, before breaking from that too and launching the EFP. His party had some initial political success in Lancashire and managed to get Cotterill and another EFP candidate elected to Blackburn With Darwen council in 2006. In the 2010 council elections, however, the EFP was able to stand onlyseven candidates nationally, three of them in Stoke-on-Trent.

One of the prospective EFP candidates for this year’s council elections in Stoke is Mark Leat, who was elected as a BNP councillor for the North Longton ward back in 2004, winning 956 votes and narrowly defeating Labour. In the general election the following year he was the BNP parliamentary candidate for Stoke-on-Trent South where he got 8.7% of the vote. By 2007 Leat had left the BNP for reasons that remain obscure and in 2008 he stood for re-election in North Longton as an independent. However, the BNP put up their own candidate and the far-right vote was divided, allowing Labour to regain the seat.

Leat subsequently joined the EFP (denounced by Nick Griffin as a “Searchlight-run phoney nationalist party” whose objective was “to split the BNP vote in Stoke”). He contested the same North Longton ward in 2010 as an EFP candidate, but with the turnout boosted by the general election he lost heavily to Labour, although he still managed to come third with 606 votes (10.3%).

So Leat does have a public profile in Stoke-on-Trent as a result of his earlier electoral activity and therefore possesses some sort of political credibility among that not insignificant section of the white majority population there who have shown themselves willing to vote for a far-right party in the form of the BNP.

The other individual to feature in the Pits n Pots piece, Craig Pond, was the Stoke BNP branch secretary before breaking away two years ago to launch his own far-right group, the innocuous-sounding but politically poisonous Potteries Community Federation. In September 2009 Pond announced that he had finally “resigned from the BNP over Griffins [sic] ruinous behaviour” and had joined the EFP, on the grounds that it is “an already founded party which has in place all the basics, but is small enough to be molded and shaped into a nationalist fighting machine”.

While Pond may lack Leat’s political profile – his one foray into electoral politics was when he stood unsuccessfully for Stoke city council in 2008 – he far outdoes Leat in the vehemence with which he expresses his racist views, particularly with regard to Muslims. The favourite quote on Pond’s Facebook page reads “Extreme islam is an insane death cult. Moderate islam is the trojan horse that will bring it to your door” and among his list of activities and interests we find links to such causes as “NO MORE MOSQUES IN BRITAIN” and “Fck the asylum seekers give the british citizens in need a hand!”.

Tony Whalley quotes from a couple of the anti-Muslim rants that have appeared on Pond’s Potteries Community Federation blog, but even worse is to be found on Pond’s other blog, that of the EFP Stoke-on-Trent Division. Here the response to the arson attack on a Stoke mosque in December last year was to applaud the perpetrators: “If the politicians will insist on withholding our rights to democracy, then people will take matters into their own hands, and bloody good on ’em!” The establishment politicians so hated by Pond were also threatened: “these lying, thieving deceitful gits that masquerade as leaders either give us our entitlement under the rules of democratic principles, or they can expect a lot more of this kind of behaviour, some of which will hopefully be targeted at them!”

You might have thought it’s just as well for the individual who posts as “EFPStoke” that they have retained their anonymity, otherwise there would be a good case for prosecuting them for incitement. But Pond has in fact made no secret of his responsibility, posting a number of articles in his own name using the EFPStoke ID. The most recent, which appeared only yesterday, was a ranting reply to the Pits n Pots exposé of the EFP.

Responding to Tony Whalley’s revelation that one of the EFP’s manifesto commitments used be “the abolition of all non-European faiths and religions”, Pond demands: “Why should we let backward and barbaric religions into our country- especially islam- when the religion upon which our democracy is founded, is looked on with hatred and lethal violence by the people they want to flood our country with?”

As for the charge that the EFP is a white supremacist organisation, Pond offers the following unconvincing denial: “we simply believe that our country belongs to our people, not the mishmash of foreigners that have been unceremoniously dumped here. Ask yourselves a question, why are immigrants here, what services do they provide that the English cannot provide for themselves? Gun toting drug dealer? Albanian people trafficker? Yardie hitman? Bitch slapping pimp? Muslim heroin trafficker?”

Indignantly rejecting Whalley’s accusation that the EFP makes “derogatory comments” about minority ethnic communities, Pond again makes a less than persuasive case, concluding: “Are you trying to suggest that there are no differences between our people and the endless stream of third world tat that government stuffs our country with?”

Pond also repudiates the claim that he and Mark Leat were thrown out of the BNP because their views were considered too extreme. It is undoubtedly true that many members of the BNP would entirely agree with the political sentiments expressed in Pond’s violently racist rants. However, the difference is that the BNP leadership have decided it isn’t politically expedient to proclaim such views in public, because this would be seriously damaging to their party’s electoral prospects. Hopefully Pond’s hate-filled diatribes will prove equally damaging to Stoke EFP in the council elections in May.