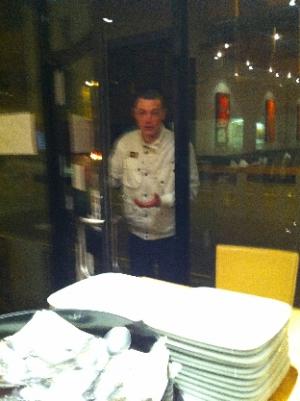 Staff at an Indian restaurant in Bridgwater believe they are being targeted on religious and racist grounds following a spate of attacks.

This week a man was convicted for religiously aggravated criminal damage and provocation of violence at the Spice Club in Eastover. But there have been further reports of an assault on a waiter, racial abuse and criminal damage. Waiter Mehbub Kamali, 19, who claims he was punched on one occasion, told the Mercury: “I have been attacked for no other reason than the colour of my skin.”

Last Tuesday, Sedgemoor Magistrates heard how Ashley Wilson [pictured], 24, smashed a glass pane at the restaurant and threatened to cut waiters’ faces because they served Halal meat. The court heard he asked Mr Kamali and Sultan Ahmet “Are you Muslim?” When they said yes, he said “I’m going to cut your face” and that it was “because I’m EDL [English Defence League].”

Wilson, of Claremont Grove, admitted the attack on September 26 and was ordered to carry out 100 hours of unpaid work and to pay £165 compensation and £85 costs. In mitigation, Crispin Hayllar said he had drunk too much and acted out of character.

Police confirmed this week that a 16-year-old and a 17-year-old were arrested on suspicion of criminal damage for an attack on the restaurant on November 3, and have been released on bail.