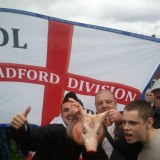 During the recent English Defence League protest in Leeds against a plan to convert a disused pub into a Muslim-run community centre, one of the demonstrators was reported to have thrown a pig’s head. It would appear that an EDL member has subsequently been charged with religiously aggravated intentional harassment as a result of this action.

Still Laughing at the English Defence League draws our attention to a Bradford-based EDL supporter going under the name of Skully Badboii Meister (or, alternatively, Dean Wray) – who, as you can see from his Facebook profile picture reproduced above, makes no secret of his involvement in the pig’s head incident. Indeed, Mr Meister is so proud of getting himself arrested over it that he has posted a photo of the charge sheet on his Facebook page.

If he could restrain his lmfaoing for a moment, his amusement might perhaps be tempered by the thought that religiously aggravated intentional harassment is an offence that carries a potential two-year prison sentence.