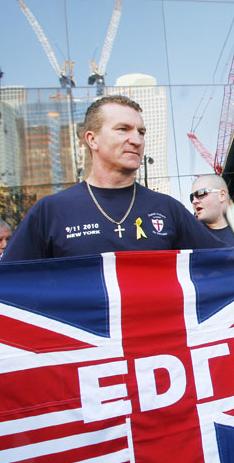 Thus the headline to a report in the Metro of an alleged attack on the house of Kevin Carroll, joint leader of the gang of racist hooligans known as the English Defence League.

You might have thought that the paper would have shown a bit more scepticism about the allegation, given that the only witness to the “shotgun-wielding attacker” was Carroll himself and that his account has been exploited by the EDL in order to whip up outrage among its sympathisers and mobilise support for its planned anti-Muslim protest in Luton on 5 February.

Yet the Metro happily gives credence to the claim by EDL members that the supposed attack “may have been an attempt to disrupt the Luton demonstration” and quotes EDL co-leader Stephen Lennon as declaring: “They won’t stop us, we will continue. We will defend ourselves. Luton demo would still go ahead… even if one of us was killed! As always, no surrender, not now not ever.”